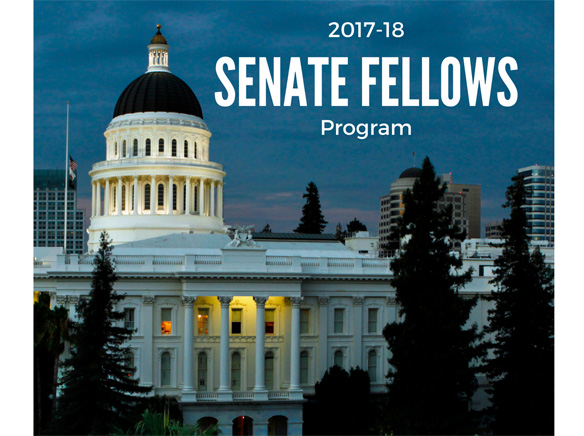 The program provides college graduates an opportunity to become full-time Senate staff members at the state Capitol in Sacramento for 11 months beginning in October 2017.  Fellows are assigned to the personal or committee staff of a Senator and also participate in academic seminars with Senators, senior staff, journalists, lobbyists, and state government officials.  The California Senate and the Center jointly operate the fellowship program for California Studies at Sacramento State University.

Fellows are paid a stipend of $2,627 per month plus health, vision, and dental benefits.  They earn 6 units of graduate credit from Sacramento State for the academic portion of the program.

“Being a Fellow provides an excellent opportunity to gain first-hand knowledge of the legislative process,” said Anderson.  “Whether your career goals are in the public or private sector, the Senate Fellows program provides valuable training.”  Former Senate Fellows include current members of Congress and the California Legislature, judges, and numerous other elected officials and community leaders.

Anyone who will be at least 20 years of age and a graduate of a four-year college or university by September 1, 2017, is eligible to apply.  There is no preferred major.  Individuals with advanced degrees and those in mid-career are encouraged to apply.

Brochures can be requested online. For more information, or to apply, visit the Senate Fellows web site (www.csus.edu/calst/senate).

The deadline for submitting application is February 13, 2017.  Eighteen Fellows will be selected in May after an initial screening of applications and a subsequent panel interview of finalists.

Race to take over termed out Jacob’s supervisor seat