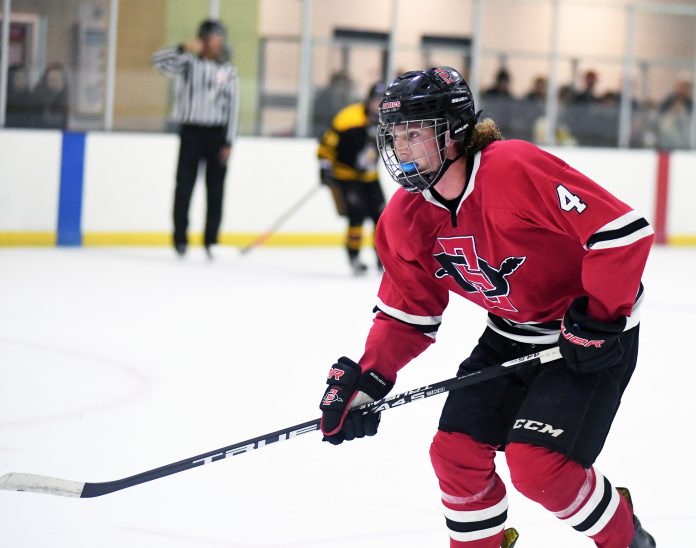 The Aztecs ended the first semester of play with a 9-4-1 overall record, including a torrid 6-1 run in their final seven games.

SDSU finished the 2018 calendar portion of their 2018-19 schedule ranked 19th among ACHA Division 2 teams in the West Region.

The Aztecs ended the first semester of play with a 9-4-1 overall record, including a torrid 6-1 run in their final seven games.

SDSU finished the 2018 calendar portion of their 2018-19 schedule ranked 19th among ACHA Division 2 teams in the West Region.

The Jan. 19 game will be played at the Pechanga Arena/San Diego (sports arena) as part of a double-header with the San Diego Gulls of the American Hockey League. The Aztecs will face off against the Ducks at 1 p.m., followed by the professional game between the Gulls and Bakersfield Condors at 7 p.m.

SDSU hosts Oregon the next afternoon at the Kroc Center with a 12:35 p.m. face-off.

Aztec head coach Phil Bateman had a lot of positives to say about his team at the semester break.

“The leadership of the program has really stepped up and helped a young talented crop of players continue to evolve their games,” Bateman noted.

The Aztecs’ complement of three East County players has contributed to the team’s success.

Junior defenseman Isaac Miller (La Mesa) is the veteran in the group. He’s contributed two goals and five points while leading the team with 32 penalty minutes in 12 game appearances.

SDSU has benefitted from play from its freshman class, according to the head coach.

“The young freshman class has really settling in and have begun to make a tremendous impact in their first 14 games,” Bateman noted.

SDSU boasts a hefty complement of 19 Californians on its 2018-19 roster, including 10 players from the San Diego region, including the team’s top three scorers.

Senior Aaron Mayer, who serves as the team’s assistant captain, leads the Aztecs with 26 points on 11 goals and 15 assists in 12 games played.

Senior Patrick Miller ranks second with 22 points on nine goals and 13 points while newcomer Devyn Taras, a junior, has accumulated 20 points (10 goals, 10 assists) with his dynamic play at the break.

In their first season after joining the PAC hockey conference, the Aztecs are currently in first place in the Southern Division that also includes UCLA, San Jose State, USC, Arizona State University and Cal-Berkeley.

SDSU dropped its opening two conference games against San Jose State but has since gone 6-1 with a win against UCLA, a two-game sweep against USC, a split with ASU and the weekend sweep of Washington for a composite 6-3 conference record.

SDSU pulled into the winter break following a key weekend sweep of Washington Huskies in the Pacific Northwest. The Aztecs defeated the Huskies, 5-4, in overtime on Nov. 30 and made a statement to close out the first semester with a 4-1 win on Dec. 1.

“From a coach’s perspective it’s nice to see the guys having success as a reward for their hard work,” Bateman said. “As a team they have showed impressive signs of playing with the tempo and pace that the coaches are asking of them. We are a team based on a quick transition game, quick puck movement and attacking foot-speed.

“We transfer that intensity into our defensive play and take a lot of pride in being a hard team to play against.”

Bateman said the team’s challenge is to keep the momentum going after the break.

Following the two games against Oregon, SDSU will close out regular season play with a Jan. 26 non-conference game at CSU-Long Beach and a two-game PAC series at Cal-Berkeley Feb. 2-3.

To purchase tickets to the Jan. 19 game against Oregon, fans can e-mail club president Troy Smith at tsmith022098@gmail.com for information.

The top four teams in each PAC hockey conference division advance to the conference playoffs Feb. 8-9 in South Lake Tahoe.

ASU is the defending conference champion.

The Aztecs are only one of two California teams ranked among the top 20 teams in the West Region. 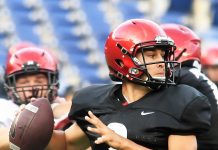 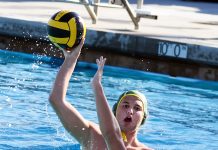