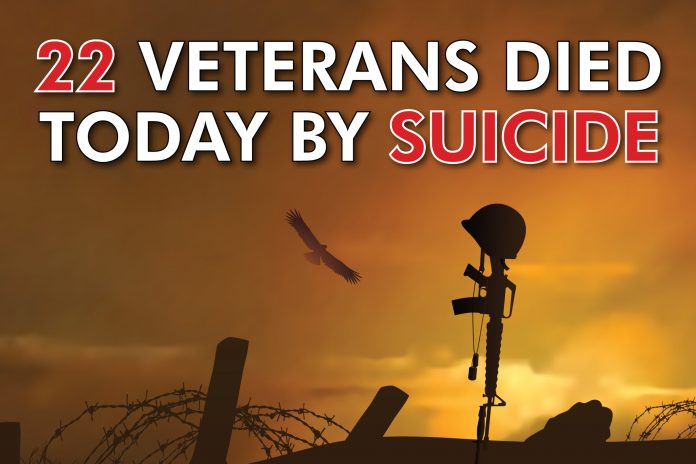 Twenty-two service members and veterans die by suicide every single day in our country. At the Renette Recreation Center in El Cajon on March 18, Amvets held an Operation Save Just One Suicide Prevention seminar led by Tom Donwen of Team Amvets Suicide Prevention Program, with speakers Dr. David Eisenberg of the Veterans Administration (VA) and Stan Collins of the San Diego Suicide Prevention Council.

Twenty-two service members and veterans die by suicide every single day in our country. At the Renette Recreation Center in El Cajon on March 18, Amvets held an Operation Save Just One Suicide Prevention seminar led by Tom Donwen of Team Amvets Suicide Prevention Program, with speakers Dr. David Eisenberg of the Veterans Administration (VA) and Stan Collins of the San Diego Suicide Prevention Council.

The statistics are alarming, but only half of the story. The highest numbers of suicides are Vietnam veterans aged fifty and over. Substance abuse, depression, and post-traumatic stress anxiety are all factors in suicide, because, “One causes the other. It took Vietnam to discover PTSD,” said Donwen.

In the World War II era before the Vietnam War, the post-traumatic stress and depression that affected soldiers was referred to as “shell shock.” There has been much advancement in the research and treatment on post-traumatic stress (the language is being changed, the word “disorder” being gradually dropped), but some of the hardest work is connecting with those who may be suicidal but hiding it from those around them. Even while in treatment, some veterans and service members still take their own life.

The fight to save those who fought is ongoing and adapting. Help is always available through the crisis line and VA locations, and it is an all day, every day mission. Reaching out and providing potentially lifesaving information and resources to veterans is what Donwen and Collins do on a daily basis. Once a vet is identified as suicidal or has attempted it, it’s Eisenberg’s job, he said, to “link veterans that have attempted suicide to continuity of care.”

According to Eisenberg, in 2013 there were 42 veteran deaths by suicide in San Diego. Out of those 42, eight were in active treatment. So far in 2014, there have been 54 attempts by veteran soldiers and eight deaths by suicide. Women veterans and younger veterans are at a higher risk. Military sexual trauma plays a factor in that statistic, which women as well as men experience while serving.

“There are 160 veterans in San Diego County actively suicidal and flagged as high risk by the providers that service them,” said Eisenberg.

Set on each seat at the seminar were awareness bracelets in camouflage colors imprinted with 22 EVERYDAY, with the Veterans Crisis Line phone number on the inside of the bracelet. Veterans press the 1 option when calling to get straight to someone ready to listen. The crisis line is available in forty states.

“People thinking about suicide just need someone to talk to,” stated Donwen.

Collins followed this up by saying every second in between the thought and the action counts, which is why gunlocks were also available at the seminar.

It is what Collins called “reducing access to lethal means,” as he explained why gunlocks were a good idea for a suicidal person who also has the key to the gunlock. “Education is the cure for suicide,” said Collins, who is also an EMT.

In those extra few seconds it takes to unlock the firearm, someone could change their mind. They could call the crisis line. They could hopefully avoid being one of the six out of ten gun deaths in America that are suicides, not homicides.

Once a vet is connected, the help and information offered needs to be carefully delivered. Collins tells veterans that they are “their brother’s keeper, and they need this information to look out for their brothers and sisters.” Recognizing the signs of depression, post-traumatic stress and suicidal thoughts are crucial, and then the real work begins—getting to the conditions of why someone has become suicidal.

That is where veterans can help others veterans and soldiers best. The instinct to look out for each other that Collins referred to was evident in all veterans in attendance.

“These are my guys,” Donwen said about those at risk. “All of a sudden, you (veterans) are back here with a bunch of civilians who have no idea what you’ve been through. You’re squadron, your support, is gone.”

The fact, and consensus, is that too many are in pain and struggling after coming home. In Vietnam, 54,000 soldiers died. Since Vietnam, 85,000 veterans have died by suicide.  “Everyone’s at risk, it’s just how you process stress,” Donwen added.

For every soldier and vet experiencing stress and trauma, there are different approaches that may be more effective than others, and a combination of treatments that can be applied.

Eisenberg said that psychotherapy and medications are “part of the armament” used to treat post-traumatic stress and depression, but alternative treatment has been introduced to veterans as well. At the VA Hospital in La Jolla, it is very common to see veterans accompanied by therapy dogs.

“Alternative medicine is becoming much more important to the VA nationally,” said Eisenberg. “We’re adding an alternative medicine provider at the Oceanside treatment staff. When you walk into the VA, you’ll see guys with dogs. The VA loves dogs.”

Donwen asked attendees to program the phone number of the Veterans Crisis Line into their mobile devices. Anyone can be someone who helps.

* Isolation or withdrawal from significant other, family, friends

* Increase in alcohol or drug use

* Ongoing sense of hope in face of adversity

How to deal with California’s worst drought in history