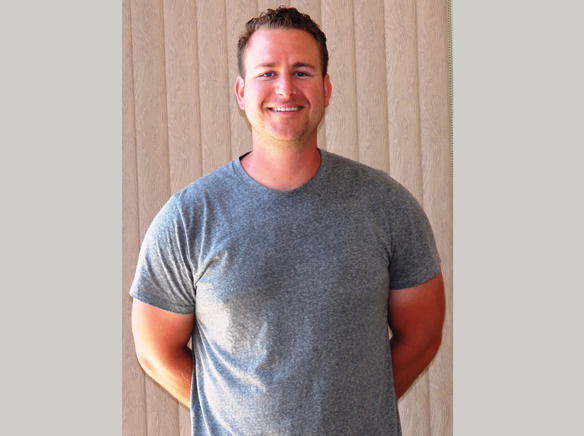 Brandon Acosta was relatively young, and definitely too young to be sidelined from his active life by serious, lasting back pain. Acosta is a local firefighter-paramedic, now 31 years old. The first real sign he had of looming trouble came in 2009 while he was washing household dishes. The position of extending his arms over the sink started a “peculiar time” in his life, he says.

Brandon Acosta was relatively young, and definitely too young to be sidelined from his active life by serious, lasting back pain. Acosta is a local firefighter-paramedic, now 31 years old. The first real sign he had of looming trouble came in 2009 while he was washing household dishes. The position of extending his arms over the sink started a “peculiar time” in his life, he says.

When he was 18 at boot camp for his Air Force active duty service of six years, he had experienced a brief muscle knot in his back. He had had no further subsequent symptoms, but then he suffered serious pain from that simple kitchen dishwashing chore, which initiated a longtime problem with severe pain in his mid-back—later involving a herniated lumbar disc.

Acosta moved to Santee six years ago. He has been a firefighter-paramedic for 13 years, now a military reservist who has been employed by Fed Fire in San Diego since July 2009.

Acosta said, “On certain days, I had a lot of pain.” He skipped work occasionally. He had to forsake his favorite avocations of dirt biking, surfing, hiking and snowboarding.

He gained weight. He recounted, “I felt less motivated. I had lots of pain at the end of the day, which I dealt with by pain pills or some beers, sometimes both,” he continued. “There was a lull at home,” during which he couldn’t keep up with maintenance and repairs on the Santee residence he shares with his family.

But all that changed for Acosta since his first session of COOLIEF therapy treatment in November 2014. Acosta said, “Within four days, I was rocking and rolling. The pain was significantly reduced.” He had a second treatment session in October 2015. “I am now almost pain free,” he attested during an interview on April 27. “I don’t see the need for more treatment yet.”

Dr. Timothy Chong first saw Acosta as a patient about three years ago. Acosta had been seeking treatment for his pain from the medical group where Chong practices, Comprehensive Pain Management Specialists, since 2010.

Chong describes his medical specialization as a physician as physical medicine, rehabilitation and pain management. He has been in practice since 2011 and has offices in La Jolla and Rancho Bernardo.

Chong learned about cooled radiofrequency therapy (COOLIEF) as an effective pain treatment while studying on a fellowship at the University of Michigan. The method has been around for about a decade, Chong noted.

The treatment is a minimally invasive outpatient procedure, which targets and treats the sensory nerves that are causing chronic pain. No incisions are involved, only insertion of a needle probe. Administration of general anesthesia is not required. A treatment session lasts under an hour in most cases. Chong said that a session for one of his patients typically takes 30-45 minutes. A patient can return home shortly after the procedure is completed. Only a single session is needed, delivered by a trained physician, and the pain relief effects usually begin within a few weeks. The pain relief on average lasts up to six months.

Acosta described how the treatment feels. He said the local anesthetic stings, “That has a pinch to it.” The actual cooled RF modality involves “dull pain, pulsating, pressure.” Chong said the session “denatures proteins in the sensory nerve that are creating pain.” Acosta explained the method as “burning the nerve off.”

The COOLIEF innovation improves on conventional RF pain therapy, by water cooling circulated through the treatment instrument for delivery of 80 degree Celsius heat projected for pain nerve ablation while leaving the contact surface cooled to 60 degrees Celsius, thus allowing a larger treatment and less discomfort from the treatment itself.

“After my second procedure last year, I was sore for about a week or 10 days,” Acosta stated. “On a couple of days in December and January, I had to take my pain pills. But all of a sudden, I started feeling much better.” The past months have been good for Acosta. Work at his job is no longer “kind of miserable,” he said.

“I am just happy to be getting back to the gym and starting to lose the weight I gained,” he went on. He is currently catching up on those overdue home fixes. “I have been working 10 to 12 hours a day on the house. At the end of the day, I hurt but I feel like I ‘worked my butt off sore’ — good not in pain.”

Acosta is looking forward to having fun again. He is eager for his first hiking trip since his relief from the chronic back pain. He might even be able to carry a backpack again.

“For people out there who have pain, I want them to know this works,” he concluded. “If anybody is like me, they will get relief. From six minutes of discomfort, they will get six months of feeling better. And the benefits of staying active can’t be measured.”

COOLIEF is the product name of the cooled RF treatment developed by Halyard Health, a medical technology company based in Irvine, California. The company’s COOLIEF treatment was awarded the Innovative Technology designation by Novation at the Innovative Technology Expo on September 10, 2014. In addition to back pain at different spinal cord sites, other pain conditions that can be treated with COOLIEF are hip pain and knee pain. More information about this technology, including a list of physicians trained in administering the treatment, can be explored at www.mycoolief.com.

Committee concerned over lack of community input and vested interests at...