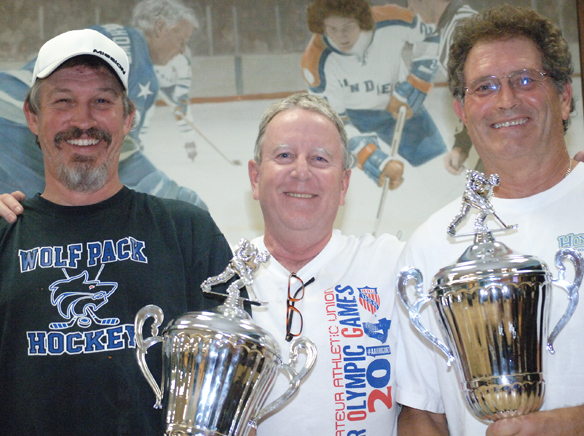 The shelves reserved for trophies at the Skate San Diego roller rink are a little less bare after teams representing the El Cajon rink returned from the recent AAU Junior Olympic Games in Las Vegas with a pair of national championship trophies.

The San Diego Sprung Hockey Hosers/Alakli San Diego Stingrays combo team captured titles in both the 21-under Club and 21-under International divisions at the 190-plus team inline hockey extravaganza that took place July 10-20 at the Las Vegas Convention Center.

The shelves reserved for trophies at the Skate San Diego roller rink are a little less bare after teams representing the El Cajon rink returned from the recent AAU Junior Olympic Games in Las Vegas with a pair of national championship trophies.

The San Diego Sprung Hockey Hosers/Alakli San Diego Stingrays combo team captured titles in both the 21-under Club and 21-under International divisions at the 190-plus team inline hockey extravaganza that took place July 10-20 at the Las Vegas Convention Center.

National championships are a rare and celebrated treasure in any community, and such is obviously the case with all those who skate at the rink, which is located adjacent to Gillespie Field.

Noris said increased interest in the adult divisions at the El Cajon facility since its opening two years ago allowed the rink to attract some of the top talent in the San Diego region.

“We were able to accomplish that with a very good bunch of players,” explained Noris, who played professional ice hockey in both the National Hockey League and World Hockey Association during the 1970s. “We had a great group of players who played very well together.”

Charles Baldwin, better known as Chucky Slick of You Tube’s “Living the Dream—Junior Hockey Anthem” fame, paced the team in scoring while both David and Eric also helped buttress the team’s offensive fortunes.

Charles Baldwin, whose You Tube video has registered more than one million hits, racked up 25 goals competing in three divisions (21U Club, 21U International and Pro/Elite) while David and Eric combined for five goals and 10 assists.

Charles Baldwin scored the game-winning goal in the San Diegans’ 5-4 upset victory against the heavily favored Mission Outcasts team from Arizona in the 21U Club Division semifinals, which team members all pointed to as the team’s toughest game at the tournament.

The Hosers/Stingrays defeated the top-seeded Revision Vanquish by an 8-3 score to win the 21U Club Division gold medal. The East County-braced team also performed double duty in the 21U International Division as the Team USA Stars representative.

Noris said about 90 percent of the players on the Hosers/Stingrays roster played for both teams at the Las Vegas event.

“The Baldwin brothers really helped pull all the other players into the mix,” Noris explained.

Latimore previously secured a silver medal with the Team USA junior men’s team at the 2011 FIRS Inline Hockey World Championships in Italy and won a gold medal at the 2012 National Collegiate Roller Hockey Association Division I finals with Bethel University.

McCrea, who attended Valhalla High School his freshman and sophomore years before moving to the Midwest to play Junior A ice hockey, led the Waterloo Black Hawks to the best regular season record in the United States Hockey League and a runner-up finish in the USHL championship finals this past season.

Teague, a member of this year’s NCRHA B-Division national champions for Lindenwood University, scored the game-tying goal with three seconds to play to force the semifinal game against the Outcasts into overtime; McCrea, a defenseman, assisted on Charles Baldwin’s game-winning goal in the OT period.

Bracing the San Diegans between the pipes was Santee’s Zach Cummings, who earned accolades as the top goaltender in the 21U International division with a 1.60 goals-against average.

“All the boys were poised, played hard and skated fast, I enjoyed playing behind them,” Cummings explained. “I knew if I did my job and played well that we had a chance to win.”

Noris said the team’s catalyst proved to be former Poway High School roller hockey star Reed Kinsey, the 2011-12 CIF Player of the Year, who was unavailable for the team’s round-robin games but joined them in time for the playoffs.

The team’s players also had to be inspired by the presence of former Scripps Ranch High School star Chad (C.J.) Ruhwedel, now a defenseman with the NHL Buffalo Sabres, who played on the Sprung Hosers entry in the Pro/Elite Division.

“It had to be a confidence boost for the guys to have someone like C.J. on the team,” Noris said. “I think it helped the guys believe they were legitimate players in the higher scheme of things when they realized they were holding their own with a guy who’s playing in the NHL.”

The players admitted they continue to be inspired by Noris, who at 62, still competes in the rink’s top adult divisions.

Noris said he drew on his experiences of both playing for the U.S. national ice hockey team in the 1976 and as the head coach of Team USA senior men’s team inline hockey team during 2008-2009 when he guided the America’s top inline squad to three major international gold medals.

Among Noris’ coaching mentors was Herb Brooks, coach of the gold medalist U.S. “Miracle on Ice” team at the 1980 Winter Olympic Games.

“When you have a talented group of players, the challenge is how to bring them together, to make them mesh as one on a team,” Noris said. “Each player needs to be a piece of the puzzle and one player not the king pin. What helped us was that a lot of our guys had the luxury of playing in our AAA adult house league. By learning how to play against each other, they also learned how to play with each other.”

Co-coach Steve Baldwin was obviously pleased by his sons’ leadership roles on the teams.

“I have coached all my sons in roller hockey for all their lives, but throughout their lives they were always on different teams based on age, so this Junior Olympics was the first tournament the older three boys have all played together and was a real joy to watch them interact on the rink,” the elder Baldwin explained. “They know each other’s moves so well it sometimes seems magical.”

Monarch hammer Lopez crowned king of the course once again