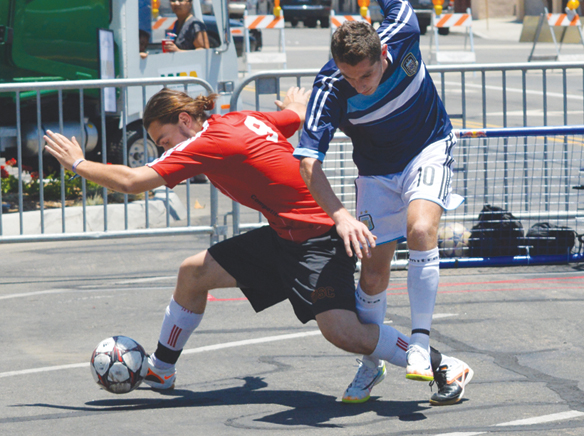 Silver Batras dribbled the ball past a defender and floated the ball towards his brother Sander Batras, just as they had practiced for so many years. Effortlessly, Sander Batrus’s foot connected with ball perfectly into the goal that was the size of an average television. The World Cup wasn’t the only soccer tournament being held this weekend.

Silver Batras dribbled the ball past a defender and floated the ball towards his brother Sander Batras, just as they had practiced for so many years. Effortlessly, Sander Batrus’s foot connected with ball perfectly into the goal that was the size of an average television. The World Cup wasn’t the only soccer tournament being held this weekend.

Forty-eight teams of local athletes competed in the 4th Annual Red Bull Fiesta de Futbol soccer tournament as a part of El Cajon’s America on Main Street festival. With a 3v3 format and eight divisions, players of all skill levels grabbed their friends and joined in.

Tournament director Alex Monnar, owner of the San Diego Fusion soccer team, said Red Bull sponsors his Fusion team, so four years ago they approached him to do a soccer tournament.

“I thought we should put a street soccer event, within another event,” he said. “And voila, they loved it.”

Waad Hirmez, assistant director of the tournament, is a soccer legend who won multiple championships as a part of the San Diego Sockers professional team. Born in Iraq, Hirmez moved to America as a teenager and graduated from Pt. Loma high school in 1981. Hirmez currently works as a coach for The Xolos USA team and at Chaparral High School in Temecula. Hirmez and Monnar spent the day shuffling brackets and assigning courts amidst the chaos of the festival, but Monnar said the headaches have all been worth it.

“We wanted to give back to the soccer community,” he said. “These events are actually free to all the participants, so it’s a great situation for all parties to participate and enjoy themselves.”

Hirmez said the street soccer format brought him back to his roots.

“It’s a wonderful thing because other countries in the world do this, and it’s a new concept for an American style of soccer,” he said. “I played street soccer as a kid.”

And street soccer is nothing new to the Batras brothers—Stivar, Silver, and Sander, whom competed in the top division and are members of the Chaldean. Today Iraq is in chaos. Factions have created a battleground in the region, causing civilians to flee and governments to take military action. But as the crisis looms in Iraq, players on the field at America on Main Street showed unity within diversity. But that does not stop the refugees here from wondering what might become of family and friends back in Iraq.

The Batras family was one of many that fled Iraq due to war and have serious concerns the fate of Iraq.

Originally from a small village called Batnaia, near North Mosul in northern Iraq, eldest brother Stivar Batras, 22, said his family left to Syria in 2007. They could not travel directly from Iraq to the U.S., so they stayed in Syria for three years without knowing the language or having any relatives there. He said his family is doing much better living in El Cajon. They are safe and can focus on creating a better future. Despite all the problems in Iraq, he said a visit in the future is possible.

“We have family over there,” he said. “We have a house there.”

Friend and teammate to the Batras brothers, Reemon Sabri, 18, had a similar story. Sabri said his family fled Iraq in 2003 amidst all the violence.

“In Iraq it was very difficult. Kidnapping, killing, you see it in the streets,” he said. “We were trying to move to Turkey for a better future and we did.”

Sabri and his family lived in Turkey for six years. He began playing soccer for the first time there and watched over his three younger siblings while his father worked.

Five years ago they moved to the U.S. He played soccer at Valhalla High School and said he met the Batras brothers at the park. He plays soccer for a club and with his friends in his free time but is more focused on school and plans to attend Grossmont College this fall.

Sabri said he still has relatives living in Bagdad.

Butrus Butrus, 20, is also from Iraq. Butrus said his family moved to Syria before moving to the U.S. in 2010.

“My father isn’t here yet,” he said. “Because of what’s going on in Syria, he moved to Lebanon and we have been waiting for him here for four years. The U.S. has refused him to immigrate here. It’s kind of hard for us.”

Butrus has one older brother, one younger sister and also lives with his mother and grandmother. He said his father has been having trouble working because of an injured knee and that they are sending him money. Butrus said as a child in Iraq he remembers his neighbor being kidnapped for saying the wrong things about the wrong group.

“I was sitting in front of my house drinking milk before school, four cars pull up next door and a guy pulls a gun out and says ‘Go inside,’ so we did,” he said. “They took him and his father and the next day we found out they had been killed. That’s how it was there. Thanks to God we left.”

Butrus said he also worries about relatives who still live in Iraq.

“My cousins live there and I have two aunts who live in Bagdad,” he said. “I hope they find a good thing to do, either leave or be safe there.”

Although he will never forget his background, Butrus said now America is his home.

“I think here is the best place for me,” he said. “I have a goal and I’m achieving it. I will have my citizenship in a year. I’ve been waiting for that.”

He met the Batras brothers by playing against and with them at El Cajon Valley High School. He currently attends Grossmont College majoring in biology and wants to be a doctor. Silver Batras, 21, just finished his freshman season at Cuyamaca College and has aspirations of playing professionally.

“I just want an opportunity to be seen playing,” he said. “Then hopefully I’ll get an offer to go pro. My mom told me when I was 2-years-old I saw the ball and have never stopped playing.”

Youngest brother Sander Batras, 19, just graduated from El Cajon Valley high school and will be heading to Cuyamaca to join his brother this fall.

To the players and organizers of this event, soccer is more than a game. It can be a lifelong profession or a means to break language and cultural barriers.

Whatever it may be Sander Batras said that his family is much happier.

“It’s a big change in our lives, we are free here,” he said. “We go to the beach and spend time with each other but mostly soccer.”

Hirmez said a lifetime of soccer leaves a lifetime of memories. His two favorites are playing against Diego Maradona in Mexico and meeting Pele.

“I did an autograph session with Pele and he walked in,” said Hirmez. “He said, ‘You are a very good player. I’ve seen you on TV.’ I was thinking, God just spoke to me,” said Hirmez.

Even though this weekend tournament is not as illustrious as his career, Hirmez said coaching has been fulfilling for him.

“The game of soccer is really a journey, it’s not a destination,” he said. “That’s the beauty about it. I know a lot about soccer, but I still learn something every time I step on the field.”