Surrounded by hundreds of people, Tasha Williamson reiterated to the crowd of Black Lives Matter supporters and civil rights activists why they were gathered in La Mesa Sunday afternoon.

“We came here to La Mesa to talk to La Mesa. We are asking for demands that are non-negotiable,” she said. 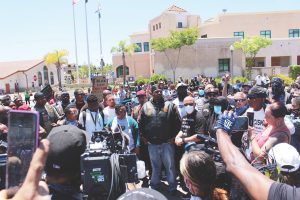 Williamson addressed a May incident in which a black man, Amaurie Johnson, was shoved and arrested by a white La Mesa police officer, Matthew Dages, for allegedly smoking near the Grossmont Trolley station, assaulting a police officer and resisting arrest.

The incident was caught on video and shared via social media.

Charges against Johnson were dropped. Dages was placed on administrative duty pending a department investigation. Williamson said one of her non-negotiable demands was the firing of Dages.

Citing SB 1421, a state law which allows the release of police officers’ miscoduct records, Williamson also demanded police release the name of the officer who shot 59-year-old Lemon Grove resident Leslie Furcron with a metal projectile at the May 30 protest.

“We don’t need negotiators, we need a town hall for la Mesa. Police said they wanted to meet with me and I said ‘No,’ they need to meet with you,” Williamson said to the crowd.

The rally attracted a wide array of onlookers and supporters, including a contingent of motorcycle clubs who came together for a Unity Ride.

One woman who participated in the ride said that as a mother she worries about her childrens’ safety.

“We have three sons so this is something we live with every day. As a mother, you shouldn’t have to worry about whether your kids are going to come home, or if something is going to happen out there to them. Are they going to be safe? It isn’t just about black lives, it is about all kids, all parents, everyone should feel safe,” she said, asking not to be identified because she is active duty military.

Racial Justice Coalition activist Desiree Smith also addressed the crowd and described emotional scars she says her then 15-year old son sustained after being put in a chokehold in 2014 by San Diego police.

“I continue to go to protests because of what happened to my son and how it could happen to anyone’s son,” she said. 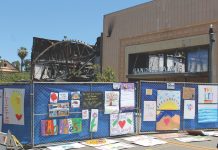