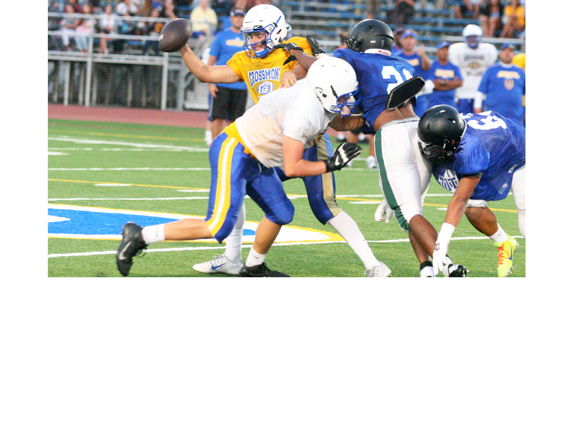 The Grossmont Foothillers hosted the Eastlake Titans in a multi-level scrimmage Aug. 20. Both Grossmont head coach Tom Karlo and Eastlake head coach Lee Price mulled over the action, logging what they liked and what needed more work.

Karlo was pleased overall with his team’s hard-hitting effort against the Titans, rated the seventh best team in the San Diego Section in the 2015 preseason poll. However, the Foothillers sideline boss admitted he wanted to see more from his offense.

The Grossmont Foothillers hosted the Eastlake Titans in a multi-level scrimmage Aug. 20. Both Grossmont head coach Tom Karlo and Eastlake head coach Lee Price mulled over the action, logging what they liked and what needed more work.

Karlo was pleased overall with his team’s hard-hitting effort against the Titans, rated the seventh best team in the San Diego Section in the 2015 preseason poll. However, the Foothillers sideline boss admitted he wanted to see more from his offense.

Karlo – and Grossmont fans – will get a chance to see how fine-tuned the Hillers’ offense is when the team kicks off regular season play Friday, Aug. 28, with a non-league home game against the Morse Tigers. Game time is 7 p.m.

The Tigers advanced as far as last year’s Division III semifinals, so the barometer looks to be set early.

“Eastlake is a real good program,” Karlo assessed of his team’s preseason test. “We went against a strong quality team. I think we got what we were looking for – getting into plays and looking at the effort … the intensity.”

Grossmont, hit by injuries last season, finished 6-6 in 2014. Karlo would like to see his squad finish better in 2015. If the team stays healthy, that could be rewarded.

Quarterbacks Jared Redfield and Hunter Gaines received the majority of snaps during the scrimmage against Eastlake. Redfield played in a limited number of varsity games last season while Gaines is making the jump from last year’s junior varsity squad.

Jake Haar accumulated more than 1,000 all-purpose yards last season. The Hilller running back is looking to make an impact at the section-level his senior season.

Grossmont’s depth on offense is clearly with its wide receiver corps. The team remains young on both the offensive and defensive lines.

The Foothillers, with a mix of veteran and youthful talent, should be competitive in Grossmont Hills League play this season, though the perennially tough Helix Highlanders enter the 2015 campaign as the section’s top-ranked team.

The Valhalla Norsemen and West Hills Wolf Pack should also be teams to keep an eye on this season in their respective leagues.

The teams advanced as far the semifinals in the winner’s bracket of July’s 32-team ninth annual South County Passing Tournament at Southwestern College.

Both coaches — Valhalla’s Charles Bussey and West Hills’ Casey Ash — were pleased by their team’s performances in the preseason event.

Both the Norsemen and Wolf Pack played seven games over the two-day span, including four playoff games on the second day of the tournament.

“I’m ecstatic because we were without our varsity quarterback for the playoffs,” Bussey explained. “We played strong.”

“It’s hard to get this far in any tournament,” Ash acknowledged.

The regular season kicks off Aug. 28 when the Norsemen play a non-league game at Otay Ranch.

Bussey believes his team is poised to build significantly on last year’s 4-7 record.

“I’m looking forward to it,” the VHS coach said. “We graduated two starters on defense. Our defense should be solid. We return three offensive linemen, our running back and quarterback, so there’s a pretty good foundation for the center of the offense. We bring almost everyone back on defense. I think we’re back on the upswing.”

The Norsemen will compete in the Grossmont Hills League alongside Helix, El Capitan, Mount Miguel, Grossmont and Steele Canyon.

“Helix is always at the top,” Bussey explained. “They’re always tough. After Helix, it’s up in the air, though.”

“They return a strong defense,” Ash said in regard to Granite Hills, which finished 9-4 last season.

But don’t pass over the pass-happy Wolf Pack

“The receivers did a great job of catching the ball,” Ash said. “They didn’t have many drops. We also played some timely defense.”

This is Ash’s second head coaching stint with the Wolf Pack. His first stint started in 2007 when West Hills won a league championship. He won another league title in his return last year.

Overall, Ash has been either a head coach or assistant coach at West Hills for 15 years.

Moyer threw for 2,136 yards and 19 touchdowns last season while Broomfield had 41 catches for 605 yards and five TDs.

“We expect to be good in the lines,” Ash said. “We have some experience there. We think we have a kid who could be a college recruit at quarterback. We hope we can throw the ball a lot. We’re excited about all the JV kids who are coming up.”

Helix to fight for state championship

Defending CIF Champions, the Cougars hope to make a splash in...