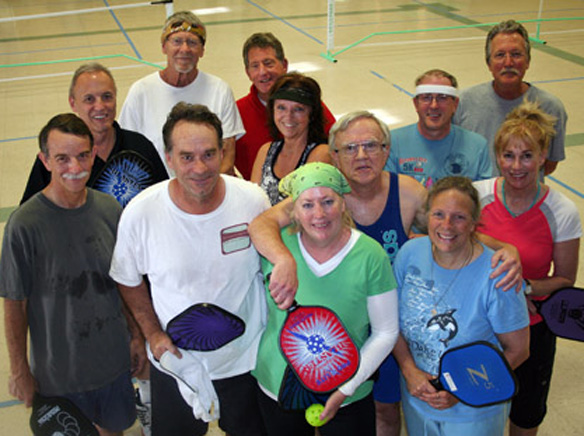 La Mesa’s Gary Crossland, 64, has kept himself in shape most of his life. Through running, and playing tennis, racquetball, paddleball and other sports, he has maintained an enviable physique for someone half his age.

However, when the wear and tear of those activities finally began causing chronic pain and other problems, he knew he had to switch to something with less stress on his body.

That’s when he discovered pickleball. It’s basically a combination of tennis, ping-pong and squash, but played at a badminton pace.

La Mesa’s Gary Crossland, 64, has kept himself in shape most of his life. Through running, and playing tennis, racquetball, paddleball and other sports, he has maintained an enviable physique for someone half his age.

However, when the wear and tear of those activities finally began causing chronic pain and other problems, he knew he had to switch to something with less stress on his body.

That’s when he discovered pickleball. It’s basically a combination of tennis, ping-pong and squash, but played at a badminton pace.

The strategy is more about ball placement rather than pure power, thus those less aggressive or competitive players can reap benefits, too.
Crossland has been active in the sport for two years and plays twice weekly at the Lakeside Community Center and other venues around San Diego County.

A truly American sport, pickleball, was invented in 1965 by Joel Pritchard and Bill Bell in Seattle (it got its name from Prichard’s dog, Pickles; although some say it was his sailboat).

It is usually played with wooden (or graphite) paddles and a small whiffle ball on a 20 x 44-foot concrete court with a 36-inch high net that can droop to 34-inches in the middle. There are doubles and singles competition.

Players hit a perforated plastic wiffleball with a square wooden racket about the size of racquetball racket. Only the serving team can score, and the first team to 11 wins.

Today, the sport is played by people all across the U.S. and even in far away places like Singapore and Kenya. Many seniors have taken up the sport in their retirement years but it is also played by thousands of school children and top athletes in their 20s and 30s.

“I love the game,” Crossland said. “It’s fun and easy and anyone can do it. It’s very popular with seniors since it does not use up a lot of energy, but more and more younger people are getting into it, too.

“That doesn’t mean you cannot get a pretty good workout, though, it’s just less stressful on knees and other joints.”

He added that an advantage is that an elderly person (or one of any age, for that matter) can learn with just a few practice games under their belts. “It helps you stay young, it’s easy on the body, it’s a whole lot of fun and it’s growing big time, all over the country.”

Crossland, is also the ad hoc spokesman for the Lakeside Pickleball Group, which meets and plays on Tuesday and Thursdays, from 2 p.m. to about 6 p.m. It’s great not only for toning bodies and reducing calories, but as a social event, as well.

“The people make this for me,” said retired businessman Rick Renken, 63, of Pacific Beach, who has been involved with the sport for about two years. “I played competitive volleyball and tennis, but then I hurt my knee. I didn’t want to sit around the house all day, so I knew I had to find a less jarring sport.


He said his wife discovered it on the computer. “The very second I played, I knew I was going to love it. It’s addictive.”

And while a slow, leisurely pace may suit some participants, Renken is no wallflower. When the action gets hot and heavy, he goes for the kill like a modern-day Jimmy Conners — all in the name of fun, however. “I never try to hurt anyone, but I can be very competitive, even in a game like this.”

The USA Pickleball Association was founded in 1984 and has helped the activity grow in popularity by organizing leagues and tournaments throughout the country.

It is played in just about every state, but is especially prominent is the Southwest, and in California, Oregon and Washington state. In addition, there are organized leagues in San Diego County from Oceanside to Chula Vista.

Like Renken, injury was also an issue for retired letter carrier Tom Lavoy, 67, of El Cajon. An avid golfer, he found he could no longer engage in the sport he loved because he hurt his back. For him, pickleball has been a Godsend.

“A friend introduced me about two years ago,” he said. “After the first few games, I knew I was out of shape — even for this. I did, however, begin to work out and play here and at the (McGrath) YMCA (in Rancho San Diego). I use an entirely different set of muscles.” Lovejoy also gets a kick out of the socialization aspect of pickleball, saying, “I have met a lot of nice people. Many of us play in Lakeside, RSD, Carlsbad and other places, too. Sometimes we even do things off the court. It’s a lot of fun.”

Retired Lakeside florist Dave Kingston, 63, concurred. “I was just walking my dog around the (Lindo) lake, when someone I didn’t even know asked me if I wanted to play the game,” he said. “I became a regular and have been coming back ever since. That was seven months ago.”

“It’s a very easy game to pick up and improve upon — if anyone has any coordination, at all.

For more information on its pickleball program, call the Lakeside Community Center at (619) 443-9176.