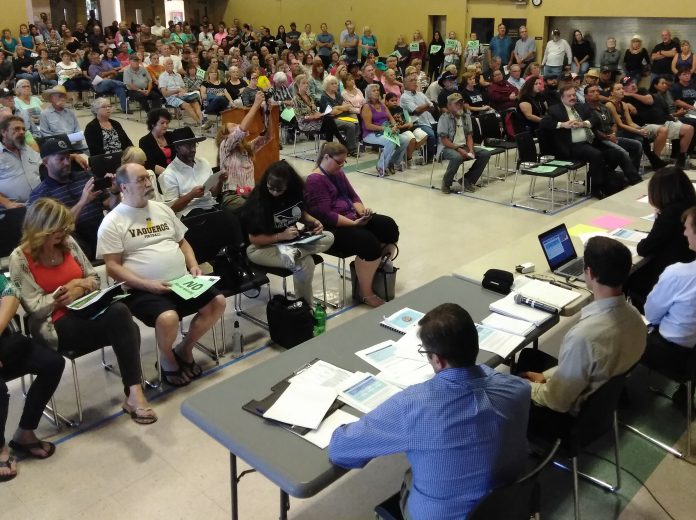 More than 500 residents filled up a 250-seat room at the Lakeside Community Center to attend the public meeting organized on Sept. 25 by the San Diego County to discuss the subsequent Environmental Impact Report (EIR) related to a sand mining plant proposed in El Monte Valley (EMV).

The locals stood up along the walls, chanting and holding up signs, despite the specific request for “no applause and no booing” voiced by Ben Nelson, Project Manager of the Planning and Development Services.

More than 500 residents filled up a 250-seat room at the Lakeside Community Center to attend the public meeting organized on Sept. 25 by the San Diego County to discuss the subsequent Environmental Impact Report (EIR) related to a sand mining plant proposed in El Monte Valley (EMV).

The locals stood up along the walls, chanting and holding up signs, despite the specific request for “no applause and no booing” voiced by Ben Nelson, Project Manager of the Planning and Development Services.

“We understand this is a highly controversial project,” said Nelson.

The county sent a panel of six employees to explain the EIR and answer questions.

The locals were allowed two minutes per person to comment. Heather Steven, Project Manager, was tasked to time the speakers, but right off the bat the battle of the colored paper slips set the tone for the rest of the heated evening.

On one side of the room, Steven demonstrated with yellow and pink slips the way she planned to give five- and 30-second warnings, while on the other side the audience responded by holding up blue slips reading “NO Sand Mining.”

The speakers largely ignored the timer and voices in the crowd told the panel, “You’re two years late with the report, you need to listen to what we have to say.”

The current EIR differs from the one completed in 2015. The amount of extractable sand was reduced from 18 to 12.5 million tons and the duration from 15 years to 12 years, allowing more than 300 trips a day for the company’s trucks on the two-lane El Monte Valley Road, five days a week.

The EIR listed as “less significant” and “mitigated” hot issues on the public’s agenda, such as air quality, biological, cultural and paleontological resources, fire and safety hazard, and noise and traffic pollution.

The EIR also claims that the high risk of Valley Fever is mitigated, with the sand miners offering to contract water from the Lakeside Water District to keep the sand wet daily for the next 12 years. These findings caused uproar in the room, with people protesting loudly. Barbara Sessions, a local resident, said she has lived in Lakeside since she was six years old.

“I don’t know if you noticed, but the whole town of Lakeside is here,” she said. “We don’t want this sand mining project to go forward. You need to stop this right now, do you understand? I don’t care how much money do you guys are going to make. You’re going to make it on the death of our children and you’re going to destroy out town.”

Sessions said the protest would not end here.

“We are going to stand on that road and we are not going to let the trucks trough,” she said. “You have to run over my body.”

All of the speakers voiced their opposition to this project with no exception. Local residents, horse people, local business owners, museum workers, scientists, conservationists, public workers – all of them found faults with the EIR and claimed the project will be catastrophic for Lakeside.

In the back of the room, Bill Adams, co-partner on El Monte Nature Preserve, the company applying for mining permits, observed quietly.

Valley resident Jeanne Swaringer asked, “Where is Bill Adams, I want to put a face to the name, please stand up.”

When Adams stood up, Swaringer shared how last year two of his company’s representatives told her there will be “No impact” if the sand mining project goes through.

“They both lied,” she said. “How can we trust them? They both said ‘no impact’ and it turns out there’s going to be a processing plant in front of my house for the next 16 years.”

Adams spoke to this reporter after the meeting.

“We are not here to have a discussion,” he said.

Further, Adams said there is no conflict of interest between his company and Michael Beck, current chairman of the county planning commission that is going to vote on this project.

“There’s no corruption,” he said. “He has no connection to this project. He owns the land next door to me. I have no connection with Michael whatsoever. I never hired him to do anything. That’s the facts.”

The 2014 court settlement between the Helix Water District and the El Capitan Golf Club mentions a nondisclosure agreement executed August 29, 2008 between Adam’s company, Helix Water District and Michael Beck’s Endangered Habitat Conservancy non-profit organization that was hired to restore the sand pit post-excavations. Moreover, in a press release published by Ron Blair, the newly installed PR person for the El Monte Nature Preserve in 2015, Adam’s company admitted to “working collaboratively with the Endangered Habitats Conservancy to design and implement the Project’s restoration strategy, EMNP has agreed to fund new habitat, emergent wetlands, and expanded wildlife conservation in the Valley.”

The same information was posted on the company’s website that is not active anymore.

Jitka Perez said she moved to Lakeside because it is a country town and it should remain that way.

“El Monte Valley is the Michelangelo of rural imagery,” she said.

Terri Bingham is an attorney and race horse trainer living in the valley.

“As far as I’ve read the EIR, East County is in trouble where it says the sand mine is going to expose us all to a 30-year cancer risk,” she said. “Let me exert my firm belief that we will defeat Adams and his sand mine.”

Concern was expressed over the third largest aquifer in the county being at serious risk of pollution if the river sand is excavated, as well as the environment and the many endangered species living in the valley.

More than 200 residents will remain without well water, being forced to connect to the city water and start paying a rate.

Local businesses in the valley might be forced to close down and move out.

Concern was raised about the risk of major fatalities in case of brush fires during Santa Ana winds, with just one road out of the valley blocked by hundreds of trucks.

Dancing and singing toward the microphone, Marie Michele Nakashima,who keeps and rides her horses in the valley, warned, “Just because we are unincorporated doesn’t mean we are subject to every idea that lines somebody’s pocket.”

Nakashima said the valley without water is a dangerous idea. “Without well water, we cannot keep the horses, the pigs, the cows, never mind the people,” she said.

The audience chanted, “Water is sacred, water is life, while Nakashima closed with the words of Theodore Roosevelt in 1903: “Leave it as it is. You cannot improve on it.”

Highlighting the evening, the Native Kumeyaay community sent a delegation to speak up on behalf of the community.

Bobby Wallace, Kumeyaay spiritual leader, started his intervention in his native language, addressing the crowd as “My people, you are my people.”

Wallace said his family has been living in the valley for 12,000 years. “Those bones in that valley have my DNA,” he said. “Those tools out there were made by my relations. We cannot stand for this. We all need to stand together, we all need to be strong, we all need not frigging compromise.”

Wallace said that the community’s children would be put at risk with so many schools and sport fields close to El Monte Valley.

“This really sucks that we will have spores getting into our kids’ lungs and that’s the truth,” he said. “You guys know this is the truth, too.”

“I’ve been around this country and I’ve seen what they can do to people,” he said. “This country hurts for water.”

Wallace also mentioned the Kumeyaay burial sites in the valley.

“There are people’s remains out there, so you guys remember, no frigging compromise,” he said, causing loud ovations.

“No Compromise” became the new slogan chanted by the residents for the remaining of the meeting.

One way to include the community in the decisional process is to have a legal intervener working with the county throughout the approval stages.

Rudy Reyes applied for this role on Monday, Oct. 1. Reyes is a Kumeyaay archeologist and was involved in stopping the Quail Brush Power plant in Santee few years ago.

“The EIR is key and extremely important at this stage,” said Reyes. “If we as a community can show and prove to the overseeing board the project would be un-mitigatable and have a negative impact on the community, it is possible to stop the sand mine.”

Cleveland National Forest Foundation raised $10,000 out of $35,000 needed to pursue a CEQA lawsuit against the county if the project gets approved based on an incomplete or inaccurate EIR.

The public has until Oct. 29 to submit written comments with the county by email to heather.steven@sdcounty.ca.gov  or  robert.hingtgen@sdcounty.ca.gov.  Adams’ sand mining project will have to pass through the Lakeside Planning Committee that has only an advisory role, and then be voted on by the County Planning Commission and the Board of Supervisors.