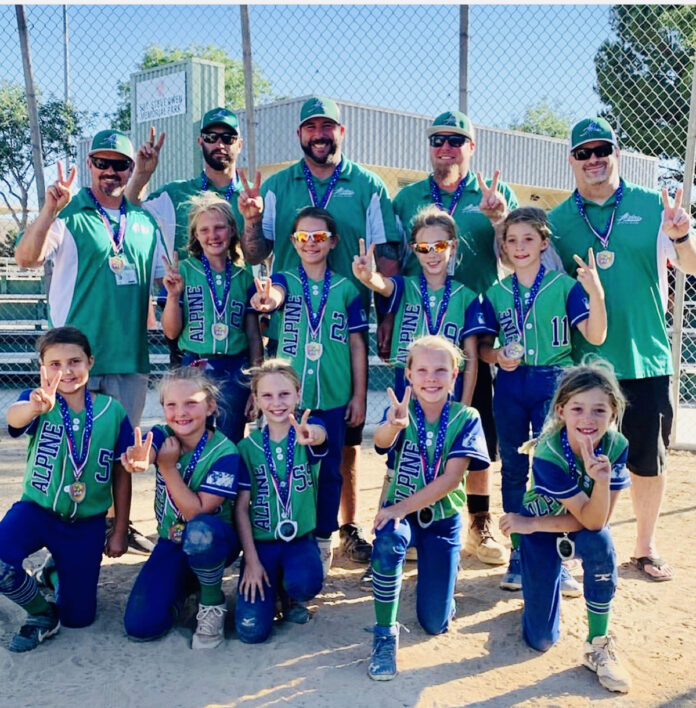 Despite a rough start, one softball team participating in a qualifying tournament last weekend put together a mighty win streak to land themselves in this weekend’s State Regionals in Santee.

The Alpine All-Stars softball team, dubbed The Mighty Nine with just nine girls ages ten and under on the roster, won nine straight games at a State-level tournament in Lancaster, California on July 11-12 after losing their first game, ultimately taking second place for the entire event and simultaneously qualifying for Regional championships.

Eight-year old Preslee Reis, the youngest on the team, said “we never give up and that’s why we win so many games.”

Her mom, Kelli Reis said winning three out of their four Saturday games in a row at the Lancaster tournament qualified them for Regionals so they went into Sunday “just wanting to have fun” but ended up winning five more games in a row, despite the high temperatures and lack of substitute players.

Shortstop Jameson Spencer’s Mom, Brindy Spencer said she watched the girls “crumbling with tears” toward the end of Sunday after playing so many games in the heat.

“It was like 102, 104 degrees in Lancaster and they were exhausted. They only had 15 minutes between games and that last game they just played with heart. They went to hold their little bats up and they were so tired but you’d smile at them and they’d smile back, then turn back to the game and just keep going,” Spencer said.

Centerfielder Lexi Passinissi and her twin sister secondbaseman McKenzie Passinissi, both 10 and coached by their dad Matt Passanisi along with Rob Spencer, Jeremy Sterling and Clint Green, agreed that the most important thing is to keep trying.

“Never give up. You have to believe in yourself and keep trying. Playing center field-— you have to run every pitch to see where the ball is going,” Lexi said.

She’s looking forward to Regionals, she said, so she can trade pins with other teams and walk in the pre-tournament parade.

Her sister, Kenzie, described the blisters she gets on her hands from pitching and said it is important to keep going as hard as possible even when you’re losing because “you never know what can happen.”

Third Baseman Avi Jordan, 10 said she was looking forward to practicing with her team ahead of Regionals.

“The hardest part is facing teams that have great infielders and great hitting, they’re the best teams because they can field the ball and don’t miss it, they can hit hard and put the balls in places our girls can’t really get to. To get ready for Regionals, we’ll practice hard and work together as a team and find sponsors,” Avi said.

Avi’s grandma, Patty Wasson said she’s looking forward to watching the girls locally, although “the entry fees are astronomical” when you have to pay for multiple games in one weekend.

Meanwhile, Chloe Lunk, 10, who plays First Base said she’s looking forward to playing at Regionals simply for the chance to take first place.

Once the kid who couldn’t lay off the high balls, she says she’s learned how to read the ball and is ready for the upcoming tournament.

“The best part about going on is the chance to beat the team that took first when we took second in Lancaster, they’re from Fullerton Hills,” Chloe said.

Scotties get back in win column against Saints