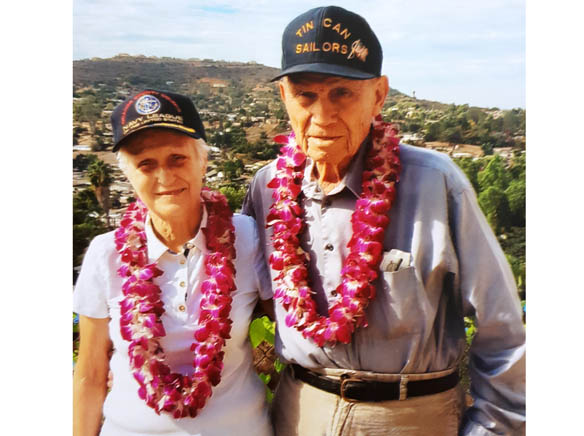 December 7, 1941 was not only a “day of infamy” for the United States. It was a day that found one Lakeside resident in the middle of history. Adam Romero was aboard the USS Dobbin, anchored at Pearl Harbor, Hawaii, when the bombs fell from the sky.

When people learn Romero is a Pearl survivor, he gets a lot of questions. But he doesn’t mind talking about it.

December 7, 1941 was not only a “day of infamy” for the United States. It was a day that found one Lakeside resident in the middle of history. Adam Romero was aboard the USS Dobbin, anchored at Pearl Harbor, Hawaii, when the bombs fell from the sky.

When people learn Romero is a Pearl survivor, he gets a lot of questions. But he doesn’t mind talking about it.

“I enjoyed my work,” he said, when asked about his military service. “I tried to do the best I could. And that’s all you can do.”

Romero lives the quiet life of retirement in Lakeside with Garnet, his wife of 23 years. They reside in a mobile park with a view of Winter Gardens, his home filled with enough photos and certificates from his military career to clearly indicate he was proud to serve his country. Romero will turn 97 in October.

A native of Belen, New Mexico, Romero joined the Navy in 1940 and attended boot camp at the Naval Training Center in San Diego. His training completed, Romero was assigned to the USS Dobbin, an old destroyer tender left over from World War I that was anchored at Pearl Harbor. Romero would never go to sea on the Dobbin, but his experience on the ship would be like no other.

“I was wide awake,” when the attack started, Romero recalled. The Dobbin was nested aside five destroyers. “One of the bombs hit us and knocked out our propellers. Luckily, that hit wasn’t right in the center of it (the ship).”

So what went through his mind at the time of the attack? “Well, you know, I was so young. I wasn’t afraid. Now I was doing something I was in the Navy to do.”

When the air raid was over, the Dobbin was damaged, but the crew still had a job to do. The destroyers next to it were still serviceable. The tender was able to supply those ships with the necessary armaments so they could set sail and starting fighting the newly declared war. Crewmen used planks to gain access from one ship to another, hand-carrying shells and other supplies so these ships could get out of Pearl. They worked all day and all night – Romero said he had never been so tired in his life.

Romero did not stay long with the Dobbin. He was reassigned to the USS Gillespie, where he made Torpedoman’s Mate 3rd Class. When the new destroyer USS Collett was christened, Romero joined that crew. “That’s where I spent most of my wartime.”

Easily the biggest honor in his mind was working in the task force of legendary Admiral William “Bull” Halsey. “Everyone wanted to be under the command of Admiral Halsey,” Romero said with great pride and respect. “We were everywhere, I’m telling you, it seemed like we never stopped.”

Romero was aboard the Collett when the ship participated in the successful raid on Tokyo Bay, near the end of the war. He liked being assigned to a destroyer. After the war, Romero was assigned to tenders and such, but he could never get used to it.

Romero served in the US Navy for 20 years, then retired to San Diego in 1960. He became a realtor and, after working briefly in Lakeside, opened a little “hole in the wall” office on Lexington Avenue in El Cajon. He worked there for 47 years, finally retiring from his second career in 1989. He and Garnet have lived in Lakeside for the past 10 years.

Garnet is an Illinois transplant who came out to San Diego when a female friend invited her to do so. She had never been out of her home state. When the friend eventually went home, Garnet stayed.

Having lost her first husband, Garnet joined a group for widows and widowers. “It was a very good support group.” She liked the activities, especially the walk groups, as she was working in an office at the time and enjoyed the exercise. One day at Lake Murray, a car pulled up next to Garnet’s. The driver was looking a little lost, so Garnet asked if he were looking for the widows and widowers group.

“Yes,” said Adam Romero, who had lost his wife some years before.

“Come with me,” said Garnet. The two eventually married. They celebrated 23 years together this past June 2017.

In December 2016, both Romero and Garnet were able to attend the 75th anniversary of the Pearl Harbor attack in Hawaii. “Every time we left our hotel room,” Garnet remembered, “someone would come up to us and shake our hands and take pictures. We had crowds gathering around us.”

The two attended the Memorial Day service at the Lakeside VFW this past May, along with their daughter from Oregon. In fact, when Garnet had learned how the VFW was honoring Memorial Day, she contacted them and asked if they could attend. The VFW was so honored they asked the Romeros to participate in the laying of the wreaths part of the service.

Only about 18 Pearl Harbor survivors remain in the San Diego area, with fewer every day. Soon they will be all gone, but who they are and what they did will never be forgotten. And while they are with us, the honor and respect they endear is precious and appreciated.

The historic Olde Community Church, owned and operated by the Lakeside Historical Society, is sporting a fresh coat of paint.

The new Hawaiian Island Style Food restaurant, in the old Pinnacle Peak site, has its new signage up and should be opening for business soon. The company has already been using the facilities for its catering service. (Historically, this was the site of the first Safeway grocery store way back when.)

Mary’s Donuts has added a nice looking awning to its exterior. MARA – the Maine Avenue Revitalization Association – assisted with the project.

After a year’s absence for repair and upgrade, the cowboy is back up in the lot just north of the Burger King. The Lakeside sign that accompanies it will be up soon as well. Thanks to David Ybarra for his excellent artwork and to Billy Ortiz for his assistance in getting the job done.

And, if you haven’t heard, an archway proclaiming the Lakeside downtown area is in the works. While the location is yet to be decided, public easements, utilities, and rights-of-way will probably determine just where that sign will be located. The most likely spot is the north end of Maine Avenue.

Transgendered are people too

The Origin gets people on their feet and on the beat