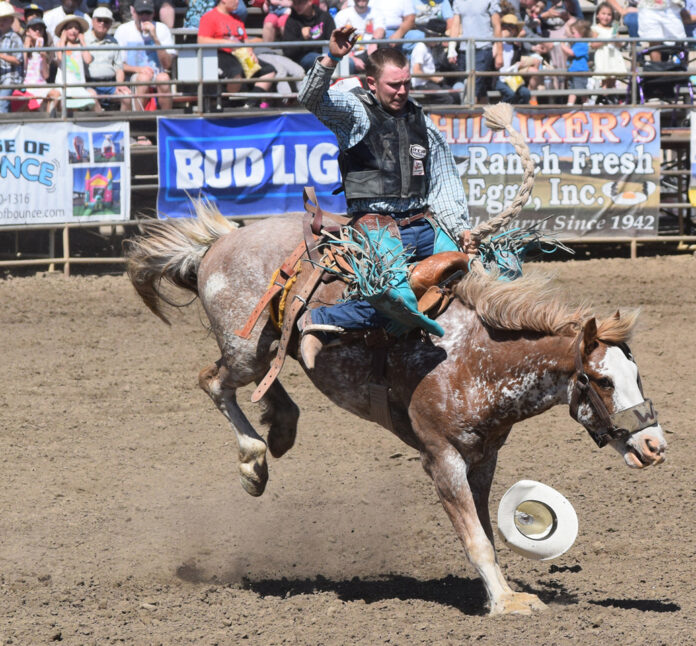 After more than a year, the adrenaline and thrills of the rodeo is back in action with the 57th Annual Lakeside Rodeo coming up Aug. 27-29 at the Lakeside Rodeo Grounds. This has been a tough year for rodeo, and for the nonprofit that runs this event every year, the El Capitan Stadium Association, which uses the proceeds each year to benefit the youth of Lakeside through donations and grants for education, arts, sports, community groups and more.

The first rodeo in Lakeside was on July 5, 2020, making this tradition a century old, but it was not until 1964 until the ESCA organized bringing the permanent arena to Lakeside after Ms. Marion Carlson donated eight acres to the ESCA to be used in support of Lakeside youth. Since its conception, the ECSA is an all-volunteer membership and earns it fund through facility and events, with the Lakeside Rodeo being its largest fundraiser of the year. Today, the ESCA provides around $250,000 to the local youth of Lakeside each year. As of 2020, the organization donated more than $4 million.

Lakeside Rode Chairman Rick Hurst said it is an “abnormal year,” as the rodeo is normally held in April, but due to the pandemic had to move it to August, which is a much hotter time of the year.

“That was the only time that it made sense for us to go,” said Hurst. “We all know that East County is a little bit warm which is why we are only a three performance rodeo this year instead of our normal four. Everybody has been shut down and rodeos have been affected all over the country. But it is important, us being the nonprofit that we are and what we do for the youth, we must pull this rodeo off so that we have the money to support our local youth.

It is going to be a challenge.”

The rodeo is only holding three performances this year. Aug. 27 and Aug. 28 will be evening performances with a matinee performance on April 29. Hurst said as of right now, the number on contestants are a little lower than it would normally see, but they expected that with it being held in August.

“When you start dealing with the real top dollar cowboys and cowgirls that we bring in every year, many of them are on the northern circuit now because of the heat,” he said. “To our advantage there have been many other rodeos in the south that will not run in June and July because of the predominant heat in many places. Ramona Rodeo is going right around us. So, there are other rodeos going on that brings in contestants, but it also allows those in the California circuit more opportunity because they can run the California circuit and not necessarily compete with as many as they normally would. It allows them to build their circuit points and get to the circuit finals. Circuit finals for California has moved this year. It is normally up in Lancaster. This year it is going to run Dec. 30 through Jan. 1, 2022, out of Red Bluff.”

But the action is still the same, said Hurst with the traditional competitive events in bareback riding, steer wrestling, team roping, saddle bronc, tie down roping, barrel racing (including Jr. barrel racers), and one of the world’s most dangerous sports, bull riding. Each performance has the rodeo’s signature event, the Kids Stick Horse Race. At the Sunday matinee, there will be an exceptional performance by Oonofre Arechiga and Cuadra Flores Caballos Bailadores. Arechiga of the Cuadra Flores Ranch in Ramona has trained Andalusian and Friesian horses in the art of dancing. Caballos Bailadores (Dancing Horses), considered the highest expression of horse training, with a horse dancing with a human riding with stunning displays of dance combinations to traditional Mexican music.

Hurst said he is looking forward to the event and he could not be happier with its stock contractors.

“Western Rodeo Company and Ted Groene, our primary contractor, there is nobody better behind the chutes,” he said. “He runs a smooth show. His son Jared is one of our Pickup Men. They have been in the business for so long. We set his contract and just say, ‘go.’ He has been with us for a long time and has our rodeo down to a tee. If you watch how the rodeo progresses, how the stock goes in and out, moves, that is all Ted and his crew. They are just amazing.”

Hurst said the ECSA has been working on needed improvements at the rodeo grounds, first the new restrooms which are now complete, and second, the penthouse will be closed this year, as it has not had the funds to upgrade it.

“We took out the very antiquated trailer restrooms that we had behind sections B through D. It has seen better days, so that has been removed,” he said. “There is a brand new block bathroom that really adds to the look and fits in really well with huge women and men’s bathroom.”

Hurst said this task would have been impossible without the community help of people donating, block, time, and materials. He said ECSA President Dick Ponce and electrician Spencer Tilton, made this project move forward to completion.

“They probably have cots down there somewhere,” he said. “We just don’t know about it yet. But they put in an awful amount of hours and it is all volunteer. It cost a lot of money, and we had to go through the whole permitting process, but that capital investment was needed to help ease the pain on our audience and help us bring in more people in turn.”

Hurst said the penthouse will eventually be built, but it will be expensive, and the committee has concerns about termite damage and a few other things.

“We are worried about it so our announcer will still be up top, we just do not want the crowds,” he said. “For the safety of our audience, the safety of our people, we are going to keep it closed this year until we can get it rebuilt. We will get there eventually. It is just a slow process.”

Hurst said if it were not for the dedication of its sponsors, the event would not be possible. It has procured a new major sponsor Mauzy Heating, Air & Solar, and kept its long term sponsors KUSI News, El Cajon Ford, Barona Resort & Casino, Coors, Boot Barn, and Parkway Plaza.

“If it was not for them doing what they do and us being able to pull in money from the sponsors, and not just the big ones, but all the little guys, Mason Saw & Lawn Mower Services, Stotz Equipment, all that little stuff adds up,” he said. “We have been quite successful. Between myself and my co-chair Brandy Marquez, we have been working that angle hard and we are in negotiations with more. It might not happen for August, but we are working for April 2022. April 22-24, we are going to go again. We will go back to our normal time and come back in full force. Hopefully, we will be all cleared from playing the COVID environment by that time. We are excited about it. We just want to get a show on.”