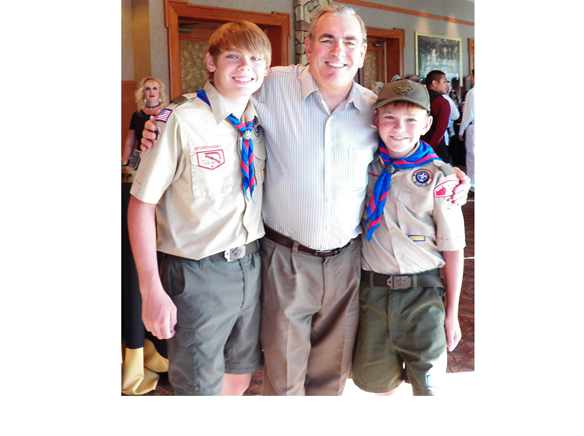 The awards and installation ceremony began with presentation of the Harry J. Spence Lakeside Citizen of the Year Award for 2017 to Janis Shackelford. Outgoing Chamber Chairman Mike Anderson noted in recognizing Shackelford that “she has been involved in Lakeside for a long time,” including lengthy service with the Lakeside Historical Society, the Lakeside Planning Group, the Lindo Lake Park Committee, the River Park Conservancy, and the Downtown Historical District. Anderson went on, describing Shackelford as “an active and involved citizen,” who was being honored for “outstanding service, leadership and commitment.”

After accepting the award plaque, Shackelford tearfully expressed humility and gratitude, “I hope to live up to the predecessors’ leadership. I thank the Chamber very much for this honor.”

Recipient of the Rick Smith Memorial Award 2017 for “Commitment to Community” was Edna Kouns. Accepting on her behalf was Betty McMillan, a columnist with The East County Californian. McMillan explained that Kouns, at 103 years of age, was resting at the Lakeside house she’s lived in since 1936. Born in 1914, Kouns has lived in Lakeside continuously, except for a brief 1916 evacuation-relocation, to survive the rainmaker-induced flood that year.

Milt Cyphert, who chairs the Lakeside Planning Group, was named the Chamber’s Legislator of the Year 2017. Anderson said of Cyphert that he had “really stepped up after the Cedar fire.” Cyphert responded, “I am honored and humbled to be chosen. Lakeside is a little piece of Americana, hometown USA, a little bit of heaven on earth.”

The 2017 Community Leadership Organizations honored were Boy Scout Troop 45 and Manzanita 4H. Oldcastle Precast was honored as Sponsor of the Year. The Chamber’s Ambassador of the Year was Dennis DiVita, and the outgoing Chamber directors, who were being termed out, were also acknowledged for their service.

County Supervisor Dianne Jacob was on hand to further honor two of the evening’s award winners, noting that San Diego County, through Board of Supervisors proclamation, had named July 13, 2017 as “Lisa Shackelford Day” and “Mike Anderson Day.” Jacob delivered a short preview of what Lakeside and the Chamber can expect in upcoming days. “This will be a special year,” she said, citing that a new library property is being negotiated for Lakeside, a “first-class equestrian center” is in the works, and a suspension and refund of the fire tax are possible soon.

Jacob then performed the official installation of the incoming Chamber Executive Board officers. New chairman will be Bonnie LaChappa, who spoke with humor and grace, saying of her predecessor, “Mike has always been an inspiration to me.” She stated that she is “excited” over this new opportunity for service, “Lakeside means a lot to me.” She said of the Chamber that the organization is more than a way to “grow business” but also offering a way “to take time to give back to the community.”

The event had kicked off with a social hour featuring tasty appetizers from the culinary staffers at Barona, a co-sponsor of the gathering with San Diego Gas and Electric. Chefs at the first station were hand-carving roast turkey breast and rosemary-pepper crusted roast baron of beef for diners to assemble sliders. The nearby “mash-tini” bar served up garlic mashed potatoes in martini glasses, which could be drizzled with a choice of gravy or pesto sauce, followed with other toppings. Crudités and fruit were available, along with dessert offerings of brownies and cookies.

Decorators had scattered inspirational signs around the social hour hall, bearing such business-friendly sayings as “Support our neighbors, shop local,” “People coming together as a community can make things happen,” and “A dream we dream together is reality.”

More information about the business support group can be found online at lakesidechamber.org, including a schedule of coming business mixers, educational seminars and special events.

Contenders hoping to make it to next round of sheriff search