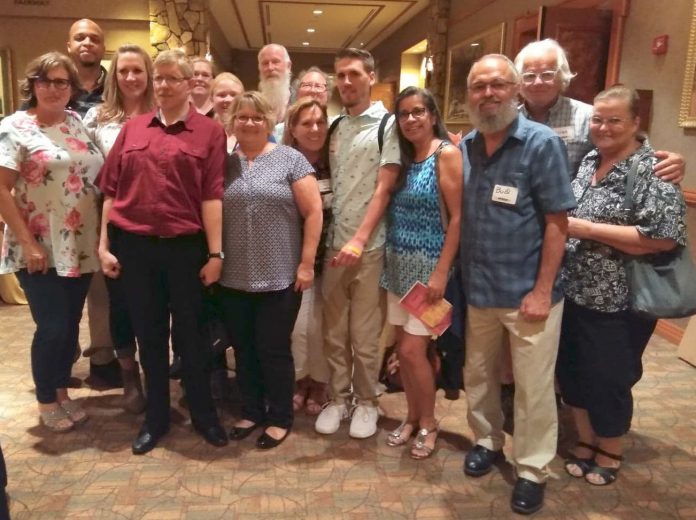 “I really love my hometown and you all being here shows that you love Lakeside, too,” said Bonnie LaChappa, last term’s chairwoman of the Lakeside Chamber of Commerce, opening the 38th Annual Community Awards ceremony.

The event took place on July 26 at the Barona Resort & Casino and honored local individuals and businesses who went above and beyond to serve the community. Several elected officials and their representatives were in attendance to present awards.

“I really love my hometown and you all being here shows that you love Lakeside, too,” said Bonnie LaChappa, last term’s chairwoman of the Lakeside Chamber of Commerce, opening the 38th Annual Community Awards ceremony.

The event took place on July 26 at the Barona Resort & Casino and honored local individuals and businesses who went above and beyond to serve the community. Several elected officials and their representatives were in attendance to present awards.

The 2018 Harry J. Spence “Lakeside Citizen of the Year Award” went to Jacob Gertson, volunteer manager for the past 17 years at the Lakeside Christian Help Center.

LaChappa described Gertson as “a dedicated and valued volunteer who serves up to 40 families in need with the respect and dignity they deserve.”

“I did two deployments in Vietnam and I know some heroes,” said Voepel. “True heroes never think they are.”

Representing Congressman Duncan Hunter, 52th District, Doug Bauldwin pointed out “the most valuable gift you could give someone when they are going through a hard time is to show them kindness and compassion.”

Gertson told The East County Californian how he become involved with the help center.

“My grandfather told me about this place,” he said. “I went there and I fell in love with it. The people are friendly and wonderful. The people that come in, they love me and they know me.”

Nancy Fink, who was honored with the Rick Smith Memorial Award “Commitment to Community,” works as a Student Support Director with the Lakeside Union School District.

Nina Drammissi was honored as the Board Member of the Year, introduced Fink as “one of those people who is all about community and not about herself.”

A resident of Lakeside for over 40 years, Gilia Cook has served the town as a dedicated volunteer on multiple committees and organizations. She is mostly known for being the founding member of The Neighborhood Health Center in Lakeside and the Mountain View Unit of Rady Children’s Hospital Auxiliary. She started serving on the Lakeside school board in 2009 and will be retiring after the next election but is planning to get involved with new projects.

Accepting the Legislator of the Year award, Cook said, “It’s been the honor of my life to serve the kids and the families in this community.”

Todd Owens was distinguished with the “Volunteer of the Year” award along with Vern Starker.

Owens initiated the “One Street at the Time” cleanup program in Lakeside after participating in “Coffee with Dianne” event with Dianne Jacob, San Diego County Supervisor.

Owens asked Jacob, “Hey, Dianne, what are you doing about all the trash in Lakeside?”

Jacob replied, “Todd, the real questionis, what are you doing about all the trash in Lakeside?”

There are now several dozen local volunteers who meet monthly. In the past year, they collected thousands of trash bags. The group is now receiving help from several businesses providing free dumpsters, tools and supplies.

Rise City Church took the stage, receiving prolonged ovations from the audience. The church is the recipient of this year “Community Leadership/Organization” for providing support to community Christmas events, community cleanups programs and especially for raising the unprecedented amount of $50,000 for the new Lakeside library.

The donation is the largest known to the county received from a religious organization for a community project in Lakeside.

LaChappa said the church “surpassed all of our expectations.”

“You take it, you give it,” said Pastor Brandon Grant. “You’re blessed to be a blessing. God blesses you not for you to hold those blessings. We believe in community and we believe the best is yet to come.”

The Chamber honored several of its own members for outstanding service to the community.

Among the honorees, Caprice Hubbard Sanders received the Ambassador of the Year Award, while Kelly Baker and Mike Anderson are the 2018 Outgoing Directors of the Chamber.

The Fraternal Order of Eagles received the Chamber Member of the Year award. Sponsor of the Year distinction went to the East County Feed & Supply, Inc. honoring Marty Barnard, the business owner, for her generous involvement as a sponsor of numerous community events.

Barnard is also on the board of the East County Equestrian Foundation working toward building a state-of-the-art equestrian park in Lakeside.

The event ended with a short ceremony to recognize the past chairman LaChapa for her community work and to introduce this year’s chairwoman, Lisa Grote.

Listing the chamber priorities under new leadership, Grote stated: “Part of my focus during this term will be to create a formal government affairs committee that will establish a working relationship with our elected officials, advocate for outcomes that are a direct benefit for our chamber’s members and to create a more favorable and profitable business community.”

Do you remember where you were when you heard? One sailor’s...