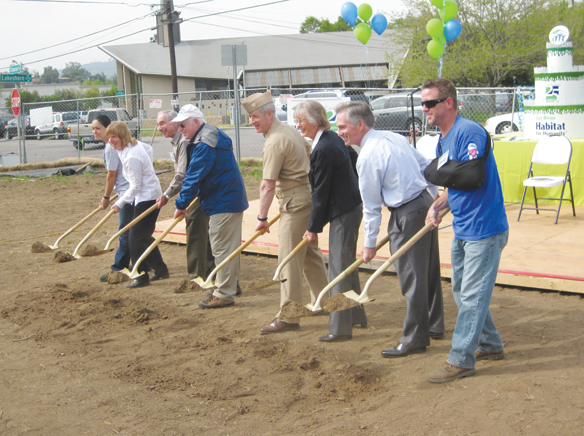 San Diego Habitat for Humanity (SDHFH) continued its 25th anniversary celebration with fanfare including speeches, live bands and a military color guard presentation at a groundbreaking for housing for wounded warriors and their families at 12306 Lakeshore Drive in Lakeside March 27.

San Diego Habitat for Humanity (SDHFH) continued its 25th anniversary celebration with fanfare including speeches, live bands and a military color guard presentation at a groundbreaking for housing for wounded warriors and their families at 12306 Lakeshore Drive in Lakeside March 27.

A groundbreaking ceremony kicked off Habitat’s first building for the Lakeside veteran’s community. Underway for construction are townhomes with state-of-the-art amenities adapted for veterans with disabilities’ special needs. This project is a joint exercise made possible by the support of the County of San Diego, The Home Depot Foundation, TD Ameritrade, SAIC, and Cox Communications. Scheduled for completion by July 2015, are four homes costing approximately $1.2 million.

A nonprofit international housing organization building simple, decent, affordable housing in partnership with people in need, Habitat’s San Diego Chapter built 187 homes with 156,000 volunteers in the past 25 years, changing the lives of 809.

The March 27 event MC’d by Randy Frisch, SDHFH’s board director, included annotations by Second District Supervisor Dianne Jacob, Capt. Gerral David of Navy Region Southwest, Habitat’s Executive Director Lori Holt Pfeiler and Anna Estrada whose family was a beneficiary of Habitat for Humanity housing.
“I’m an attorney so I’d like to apologize for that,” joked Frisch. “It’s an honor to have a military presence here and exciting to see families that have invested hundreds of hours to build their own homes and we could not do it without each of you (Habitat volunteers).”

Affirming Lakeside as a community “that has in its heart the freedom of this country and what America really means to each and every one of us,” Jacob said this housing construction is giving back to “those who have fought for us over time”

“It’s difficult for the able bodied to related to being disabled,” Jacob said. “It’s easy for us to reach for something, or get in bed or do all these daily functions, but it’s not easy for disabled veterans coming home from the war.”
Capt. David said there the good news is medical technology is better with 96 percent of the people who make it to the field hospital live,

“The bad news is that means we have a whole lot of wounded warriors that are surviving and coming back,” he said.

David said Habitat’s Lakeside project is “going to make a difference,” and thanked Habitat for Humanity for “building a better future by building for the brave.”
Anna Estrada of Oceanside said her military family is moving their three children from a 3-bedroom apartment to a home with a yard.

“You guys have made our family’s dream come true to own a house,” said Estrada. “Not a lot of people know about Habitat, we need to get the word out.”
Estrada said Habitat volunteers helping to build homes for veterans and their families “care about others.”

Lori Holt Pfeiler, Habitat executive director said the Lakeside groundbreaking was a historic moment.
“All of us here are always going to remember this,” she said. “We’ll think about the families that live here, and the part that we played.”

Before Jacob and Habitat employees donned hard hats and picked up golden shovels to scoop dirt with confetti flying in the background, Frisch said, “Now comes the moment in the program you’ve all been waiting for. I have nothing to say.”