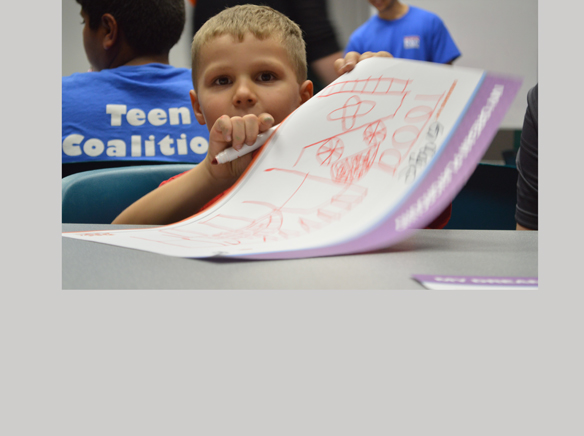 KaBOOM! This is not a new word for the city of El Cajon as it entered its first Design Day to build a park in one day to serve the community. Now its fourth KaBOOM! project, this one is unique in the fact that it is to be built directly in front of the El Cajon Branch Library, bringing the San Diego County Library into the network of partners in pulling this project off. Other partners in this “literacy playground” is the CarMax Foundation, Stoney’s Kids and the Downtown El Cajon Business Partners.

KaBOOM! This is not a new word for the city of El Cajon as it entered its first Design Day to build a park in one day to serve the community. Now its fourth KaBOOM! project, this one is unique in the fact that it is to be built directly in front of the El Cajon Branch Library, bringing the San Diego County Library into the network of partners in pulling this project off. Other partners in this “literacy playground” is the CarMax Foundation, Stoney’s Kids and the Downtown El Cajon Business Partners.

Primarily designed from the ideas of children in the community, the El Cajon Library opened its doors on February 17, first to the children who came in and worked on a couple of activities prepared by KaBOOM!, and eventually drawing their perfect playground. Swings, giant slides and jungle gyms were the talk of the evening. The first and most important step according to Rachel Malkusak, KaBOOM! project manager, before the official Build Day on April 7.

“We’re excited to be working with such experienced partners,” she said. “This is made possible through the funding power of the CarMax Foundation. We’re getting into the kids process, where the kids get to draw out their favorite program. We use that to make a custom playground design. Then the adults come in, work with the kid’s ideas and come up with design plans. We take the ones designed by the kids, combine them with the ones combined with the adults and send it in a report to Playworld Systems. They will come back with three designs that the community will vote, or fundraise to pick the design that will be built”

El Cajon Recreation Services Manager Frank Carson said the city is excited about the location of this new playground, and the new partners in this KaBOOM! project. He said they already have the commitment of the community for the 75 volunteers needed to build a playground in one day.

“We are ready to go,” he said. “This is probably the most diverse crowd you’ll see at Design Day in terms of pre-registration. We’ve never had this diverse of a crowd of social demographics.”

Carson said they had to remove some trees, especially an old eucalyptus, because it is self pruning and a danger near a playground. But the city is replacing tree for tree and it has some more park beautification projects in mind for the area of the library and playground.

Judy Halish, CarMax assistant office manager said her involvement with CarMax Cares, through the CarMax Foundation, has been something she has loved about her job in the more than four years she has worked with them. Involved in a lot of team builds with hands on activities with various organizations, she said it allows the CarMax employees to get involved within the community, and in many cases like this, funding through the CarMax Foundation. In her time with CarMax, Halish said its helped the Boys & Girls Club, YMCA, Helen Woodward Animal Shelter, and the San Diego Food Bank.

“KaBOOM! has a special place in my heart,” she said. “I’ve been doing it since I started with CarMax, helping out as a volunteer. I have been able to play different roles in the process. I’ve been a building captain, participating in five projects now and I’ve been asking since the beginning when are we getting it in San Diego.”

She said CarMax is excited to part of the El Cajon project as part of its greater San Diego community and it has additional focuses of continuous work with KaBOOM! affiliates to build a longer lasting relationship with the communities that it builds the playgrounds over the next three years.

“It’s been incredibly enriching and our associates love coming out so much that we have to turn people away. It’s incredibly gratifying to start with a dirt lot and then at the end of the day have a playground that the kids can play with. It’s immediate gratification for us and for the kids,” she said.

Kristin Ward, youth services manager, El Cajon Branch Library, said the library could not be more excited about getting the playground right in front of its doors and that it will tie in with many of its ongoing programs.

“During the summer we serve around 200 lunches a day to kids and we use that front area for playtime afterwards,” she said. “We are so excited to have a playground for the kids to play on. We’re installing the playground right around the time of our Fiesta (April 9), and the community will be able to come out and celebrate and see the playground. We think it’s going to kind of change the way the community uses this space.”