After 18 hours of deliberations over four days, the eight-man, four-woman jury said they were hopelessly deadlocked 9-3 in favor of conviction of first-degree murder for Edward Jamar Brooks, now 39.

Brooks is accused of beating LeRay “Mac” Parkins with a baseball bat in an 8:30 a.m. robbery in North Park on Aug. 23, 2000. Parkins died two days later in a hospital without regaining consciousness.

Jurors had trouble confirming the accounts given by Lester Bell, now 39, and Terrence Brown, now 38, both formerly of Spring Valley, who testified Brooks struck the man.

“It was too much information and not enough reliable evidence,” said the jury foreman afterwards. “There was no way to pin down who (did it).”

Several jurors said the stories of Bell and Brown did not match, saying “they contradicted each other” in some details. “We’re talking 19 years ago,” said one juror about the accounts of witnesses.

Another juror said they were puzzled that the District Attorney’s office treated Bell and Brown differently than Brooks.

Brooks is facing life without parole if he is convicted of first-degree murder with the special circumstance of murder during a robbery.

One juror steadfastly believed Brooks, who testified it was Brown who struck Parkins. Brown denied it, saying he was the getaway driver in his own car, and was not present at the scene.

“They didn’t know what to believe,” said Brooks’ attorney, Robert Ford, to Maino. “We did our best. I don’t think our best is good enough.”

The jury re-heard testimony from a crime lab specialist who said Brooks’ DNA was found in three places in one pocket of Parkins’ pants where his wallet was stolen. The defense conceded that Brooks stole his wallet.

After Brooks was arrested in North Carolina in 2018, a detective said she asked him if he knew anything about a slaying in North Park and he replied, “Oh, the bat,” without her mentioning that was the murder weapon.

Bell’s ex-girlfriend testified he called her where she worked at a clothing store and he asked her if he could use someone else’s credit card. She recalled she said, “Don’t get me in trouble.”

She remembered the three men going through her line as a cashier with the credit card, which turned out to be from Parkins, on the day of the murder.

Brooks, Bell and Brown all remain in jail.

Former teacher to stand trial on charges of molestation and rape

A former teacher at Christian High School in El Cajon has been ordered to stand trial on charges of molesting two female students and rape of three adult women whom he met at a modeling website.

One charge of contacting a minor with intent to commit a sexual offense was dismissed at the 2-day preliminary hearing for Dustin Steven Sniff, 38, of El Cajon.

Sniff will be back in court on Dec. 3 to schedule a trial date. His attorney has declined comment.

Some of the charges go back to conduct in 2008 and 2009. The offenses with the students allegedly occurred in the 2016-17 school year. Sniff was terminated from the high school some years ago.

Sniff has pleaded not guilty and remains in jail on $1 million bail. 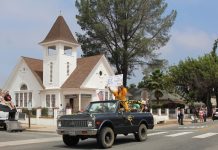 On the flip side of graduation

Man who stabbed wife to death receives 16 years to life