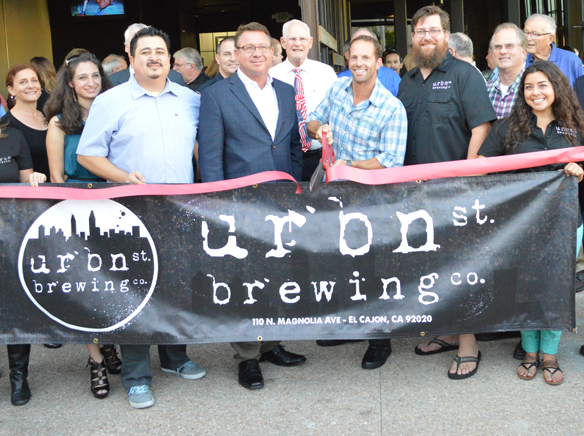 It was a warmed welcome for urbn Coal Fired Pizza + Brewery in El Cajon as more than 100 people showed up for its long awaited grand opening. Since its soft opening in early July, urbn is already becoming a place to go in downtown El Cajon. Now with a full menu, custom brews ready and those in the making, this newest addition to downtown has 36 employees and its General Manager Alex Carballo said he could not be more pleased with the progress he has already seen.

It was a warmed welcome for urbn Coal Fired Pizza + Brewery in El Cajon as more than 100 people showed up for its long awaited grand opening. Since its soft opening in early July, urbn is already becoming a place to go in downtown El Cajon. Now with a full menu, custom brews ready and those in the making, this newest addition to downtown has 36 employees and its General Manager Alex Carballo said he could not be more pleased with the progress he has already seen.

Working at Stone Brewing Co., Carballo said that he was not looking to leave, but living in El Cajon, he drove by and immediately thought this was the place to start something new.

“Living in this area, I was upset that the old brewery didn’t do as well as it could have,” he said.

Carballo said after deciding to move forward with the deal he looked around and found a great partner in Jon Mangini. He said his knowledge of the restaurant business, in how it works in all aspects of running a business, is an asset as he is a hands-on operator. He does sales for the brewery, merchandising, marketing and manages the restaurant.

“That is one of my main key strengths,” he said. “Especially with a new operation to make sure everything is balanced.”

Getting with urbn was a bit of luck in someone knowing the right people, he said. Through a friend he was introduced to urbn, which is not exactly what he is trained for as a fine dining chef, but in the end he thought it was the right way to go and his compatibility with his partners is strong.

Carballo said it starts with a “dating period” where you get to know each other, how they work, and how they do business, but he said it is essential in creating a great partnership to lead to success.

He said business is going well and now it is just like any other restaurant in filling in the gaps. He said its dynamics are different, they do not send out coupons and have very little specials. He said it is a “fickle point” and that if you are constantly creating discounts, then just make that the price of the item. With 36 employees and a large amount of square footage, he said he has a large overhead to achieve and the only way to meet that is with common core principles.

“There are three major things that make a restaurant a excellent place,” he said. “Quality, service and environment. Making sure your product is consistent, making sure your staff knows where they are supposed to be. Staff needs to be well informed on what things are happening in the restaurant, informed about the quality of the product and what products they are serving. The other thing is environment. Is it clean? When people walk in do they see what you have done to make them as comfortable as possible?”

He said it is all of the little things from lights, music and TVs that can make a difference in whether the environment is welcoming to customers.

“But we know that we have a good product, we have a cool place to hang out and we know that our service points are there,” he said. “If we are doing a good job organically, that is going to spread.”

He said the food is great and when you see it, you can tell that someone put great effort and care into making it just the way it should be made.

Carballo said making the move to El Cajon was the easiest decision and working with the city was great.

“I can see the demographics of El Cajon every day in my clientele,” he said. “El Cajon has a rich, rich history, and I see it every day in the people that I meet.”

Carballo said being part of the community is as important and it has and will continue to work with many of the local charities. Its grand opening benefited St. Madeleine Sophie’s Center.

Callaway Ryan, head brewer said he has been brewing since 2005 in Austin, and then moved to the Midwest where he learned on how to grow your product and be consistent. But, the brutal winters brought his wife and he to San Diego where he went to work with Stone. He said it was a great job, but not much room for moving up and then he heard that Carballo was moving to another venue, he sent him his resume and after meeting the partners, found himself a home at urbn.

“Now I am here and making my own beer, which is pretty awesome,” said Ryan.

He said he is already confident enough with volume that he has put in his hops order for next year. It has a 15-barrel brew house that produces about 1,000 barrels a year. He said he just wrapped up a Dry Irish Stout for a non-profit cancer research benefit. There is Autumn Ale that is nearly done and its main core beers are an IPA, Brown, XPA, Saison with some seasonal EESB and Porter.