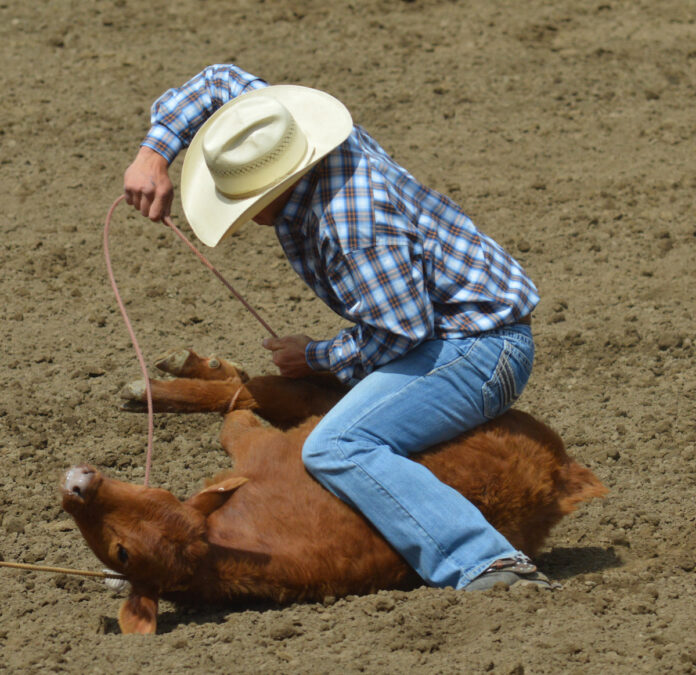 Tie-down roper Westyn Hughes competed in rodeos on four consecutive days in four different states August 26-29 and completed his four rodeos with a win at the Lakeside Rodeo in California.

Hughes, whose four rodeos were all outside his home state of Texas, roped and tied his calf in 9.2 seconds to win the August 27-29 rodeo at the Lakeside Rodeo Grounds. Ty Harris, who is also from Texas, had the second-place time of 9.7 seconds. J. Cody Jones, who lives in the Northern California town of Ukiah, took third place with a run of 10.3 seconds. The top three runs all took place Aug. 29.

“I love this rodeo,” Hughes said.

“I love the state. I love the people out here,” Hughes said.

On Aug. 26 Hughes roped at the Golden Spike Rodeo in Tremonton, Utah. His Aug. 27 run was at the Range Days Rodeo in Rapid City, South Dakota. He spent Aug. 28 at the Colorado State Fair and Rodeo in Pueblo. “I drove to all of them,” Hughes said.

Hughes then obtained an airplane flight from Colorado to San Diego, obtained a ride to Lakeside, and used Jones’ horse. “We took first, second, and third all on the same horse,” Hughes said.

Flo is 12 years old. Jones has had Flo since she was three. “She’s just good. Just a wonderful horse. Easy to win on,” Jones said.

The junior rodeo was in Potter Valley, which is about 20 miles north of Ukiah. Lakeside is about 615 miles from Ukiah. The junior rodeo ended about 9:30 p.m. Saturday night and Jones arrived in Lakeside around 9:30 a.m. Sunday morning. The Aug. 29 performance had an 11 a.m. start.

Wes Lockard, who lives in the California town of Atascadero, had a time of 10.6 seconds to lead the rodeo prior to the Sunday performance. Jones became the new leader with his run before Harris took over the lead and Hughes posted a faster time than Harris.

“I missed the barrier a little bit,” Jones said. “Them guys got better starts.”

Jones may receive some gratuities from Hughes and Harris for the use of Flo. For the purpose of earnings Hughes received $1,647.17, Harris took $1,475.80 from the pay window, and Jones added $1,254.43 to his season earnings.

Hughes lives in Caldwell, which is in eastern Texas between Houston and Austin. He will return to California this weekend for the Ramona Rodeo and the Santa Maria Elks Rodeo.

Two California cowboys, Stan Branco of Chowchilla and Tucker Allen of Oak View, had Steer Wrestling times of 4.9 seconds to split first and second and earn $1,743.70 apiece. California team ropers Lane Santos Karney of Creston and Wyatt Hanson of Oakdale had a run of 5.6 seconds for the win and $2,199.84 apiece. Kathy Petska from the California town of Turlock won the Barrel Racing with a run of 17.24 seconds and took home the first-place check of $1,715.40. The California town of Red Bluff is the home of Zack Brown, whose 81-point ride on Showtime gave him the Bareback Riding win and $1,749.52. California cowboy Emiliano Garcia of Hesperia scored 81 points on Square Bush to win the Bull Riding, $2,011.20 of earnings which count in the standings, and an additional $1,575.44 of ground split money since the event had fewer qualified rides than paying positions. Three saddle bronc riders had scores of 80.5 points for a three-way split of the win and $1,412.50 apiece; Ethan Lemmons is from the California town of Castro Valley, Reed Neely is a California cowboy who lives in Sanger, and Leon Fountain lives in the New Mexico town of Soccoro.

The Lakeside Rodeo also included a tribute to former National Finals Rodeo steer wrestler C.R. Jones, who passed away in his Lakeside home Aug. 19 at the age of 92. Shirley Jauregui, who as Shirley Lucas was Miss Rodeo Lakeside in 1947 as well as one of the Lucas Sisters trick riders, passed away Aug. 23 at the age of 97, but the rodeo committee did not learn of her passing in time for a memorial tribute.