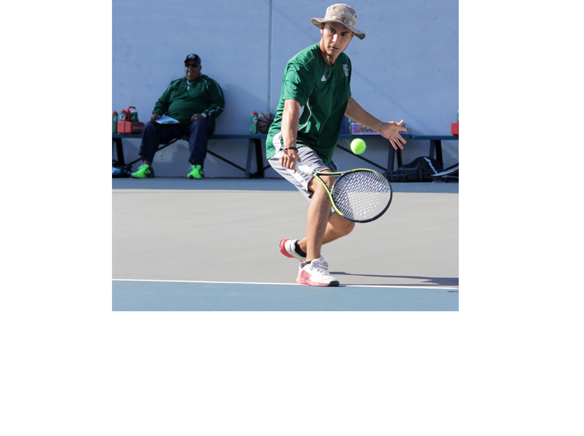 Helix High School’s boys’ tennis team is redefining what it means to be a student athlete.

Although the Highlanders may be struggling to keep up with the heavy-hitters in league this year, they have more than their fair share of standouts, on and off the court.

Helix (6-3), defending league champion, has been stuck behind Steele Canyon (9-1) and Grossmont (8-1) for most of the season. But head coach Jesus Diaz said he has no complaints.

Helix High School’s boys’ tennis team is redefining what it means to be a student athlete.

Although the Highlanders may be struggling to keep up with the heavy-hitters in league this year, they have more than their fair share of standouts, on and off the court.

Helix (6-3), defending league champion, has been stuck behind Steele Canyon (9-1) and Grossmont (8-1) for most of the season. But head coach Jesus Diaz said he has no complaints.

“We’re in a winning season,” he said. “We’re one of the better teams in East County. Steele Canyon is doing awesome, Grossmont is doing great, and then it’s us. So, we’re the top competitors in our group.”

A huge factor in the Highlander’s fall from last season’s successes, said Diaz, is the absence of one of their sophomores.

Siem Woldeab, son of Eritrean immigrants, is easily the best player on the team. In fact, he is one of the best in the country.

Woldeab plays mostly national tournaments, which means he has less availability to play for the team, said his coach.

“He gets a little cocky sometimes so I have to remind him who’s older, but he’s in love with the sport,” he said. “He wakes up at five o’clock every morning to go to the gym to practice with Coach.”

Both boys have been playing for the better part of a decade. Senay, a junior, still plays for Helix, though no longer as captain due to an extensive workload. He and his brother both prioritize their studies, said Diaz.

“[Siem] is looking to go pro, but his parents are really big on education,” he said. “All it takes is one slip and a fall, break an ankle, twist a knee and this career is over in tennis, but as long as you have an education…[it] is going to take you a lot further if something happens.”

Stanford is just one of the colleges vying for Woldeab’s attention.

Diaz said he tries to instill the education mindset into all of his players.

“That’s what I profess as a coach,” he said. “Education is first, tennis is secondary.”

Most of the Helix tennis boys graduate and go to UC’s, said Diaz. Part of his goal as a coach, he said, is to ensure that kids from the community are able to reach opportunities that might not exist outside the arena of student athletics.

“A lot of these kids invest a lot of time in this game, and they’re not going to play in college,” he said. “So I don’t want them to waste that time, they need to invest in their education.”

One such student is Helix senior Jonathan Bojorquez, whose story begins in Central Mexico where his family is from.

“I moved here my freshman year and didn’t speak any English,” said Bojorquez. “And I moved without my parents so it was kind of hard. We lived in an apartment next to Helix, just me and my brother. I was fourteen.”

“There were around 200 people competing in this organization, Bridge for Kids, and the requirement was to write a 700 word essay,” he said. “So I talked about my story and I won first place.”

Although he helped the Highlanders win their league championship last season, Bojorquez said he probably is not good enough to play tennis on scholarship without taking a few years to train at a community college.

“I’m doing pretty good in academics and I don’t want to mess it up,” he said.

Captain of the school’s speech team, Bojorquez is qualified to compete at the state and national forensics tournaments this year.

Diaz said the whole team is pretty well rounded, with scholars and athletes alike, all from different backgrounds and communities.

“We have so much diversity on the team that it has made it a great thing for all of them to be a part of a family like that,” he said.