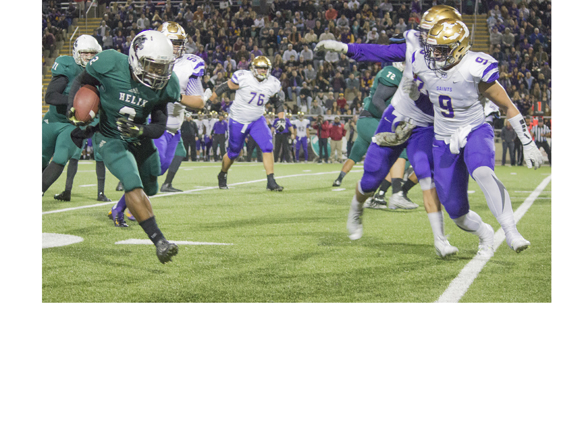 In the split second of stillness between the moment Helix High School running back Nathen Stinson took control of the ball and the moment the stadium erupted in earth-shaking cheers as the varsity ball-carrier began his sprint from the 48 yard line to the end zone, the stadium held its bated breath. Would he do it again?

In the split second of stillness between the moment Helix High School running back Nathen Stinson took control of the ball and the moment the stadium erupted in earth-shaking cheers as the varsity ball-carrier began his sprint from the 48 yard line to the end zone, the stadium held its bated breath. Would he do it again?

Stinson ran the ball into the St. Augustine end zone with 2:11 left in the fourth quarter, bringing the score to 43-30 lead and sealing the win for the Scotties. It was his last of four touchdown runs during the game, amassing a total of 273 yards.

Saints fans began filing out of the stadium as Helix converted the extra point and the clock ran down the final seconds of the CIF open division 2015 San Diego section championship game. Helix won, 44-30.

Called the most anticipated game in San Diego prep football by the KUSI Prep Pigskin Report, the Helix Highlanders (10-1) and the St. Augustine Saints (10-2) shredded the green at Southwestern College’s DeVore Stadium on Saturday, December 5. With a max capacity of 7,275, the stadium was standing room only. Sidelines were flocked with media, college recruiters and a host of high school cheerleaders and marching band players.

Stinson was the target of several college scouts who said he has been on their radar since his sophomore year. He did not disappoint, scoring an 80-yard touchdown minutes into the game. “We worked real hard in practice and it paid off,” said the running back who said he plans to attend Northern Arizona University next year.

Helix played cleanly and powerfully from start to finish.

After winning the coin toss, Helix deferred to the Saints who chose to take possession but quickly went three and out.

The Scotties seized control, driving down the field and punching in a score from the 1-yard line. The Saints quickly followed them onto the scoreboard for an even 7-7.

Scotties came back with Stinson’s 80-yard touchdown, but the Saints were not in the mood to muck around. St. Augustine junior quarterback Rodney Thompson ran two touchdowns, making the scoreboard favor the Saints, 21-14.

Minutes left in the first half, after being sacked on a first down, Austin recovered 18 yards for his team, ran in a touchdown and evened out the score for the close of the action-packed first half.

Helix was in rare form during the second half. Both offense and defense worked with seamless coordination and agility. Stinson stole the show with his three additional touchdowns, which had the stands quaking with cheers as he spanned the length of the field. Austin and wide receiver Mekhi Stevenson also made several stunning plays. Their effortless synchronization did wonders for the offensive line and kept the Saints sweating on every yard.

Stevenson attributed the team’s efficacy to their newfound chemistry and trust.

“On the weekends, we’re always together hanging out and trying to do stuff together,” he said. “This year we’re more like a pack, more like a brotherhood.”

After surrendering two points on a safety, the Saints gave the Scotties one last pushback with a touchdown at the end of the third quarter, but missed the extra point.

Stinson’s final touchdown and the extra concluded a messy fourth quarter of territory squabbles. Helix fans roared triumphantly as the clock ran out with the Scotties in possession, the scoreboard displaying a well-earned 44-30 victory.

“Last season this time we were coming off the field as number two,” said Austin. “We put in a lot of work in offseason, faced adversity and played for our team. We came out on top. We’re a bunch of fighters, that’s what we are.”

The win was especially sweet considering that Starr will be stepping down as head coach at the end of the season.

“I’m really emotional right now because it’s Coach Starr’s last year and it’s nice for us to finish out on top for him,” said Stevenson. “I was on this team for the last three years. We came up short semifinals my sophomore year and then last year we couldn’t get it for the seniors. Now we’re finally finishing on top our senior year.”

Stevenson has been offered five scholarships to colleges and is considering a career in journalism.

Helix head coach Troy Starr said he was pleased with the momentous win.

“It was just great effort by all the players,” he said. “These are awesome kids, we’re really proud of all of them. It was just a great win against a great team.”

Although he will not be coaching next season, he said he does not plan on abandoning the team.

“I’m staying at the school, I’ll still continue to teach,” he said. “I’m there, that’s my school, those are my people. I’m not retiring, just stepping back.”

Austin said the team will start preparing immediately for their next game against Mission Viejo for the Division I-AA CIF State Football Championship Bowl regional game on December 11, but in this moment, he is thoroughly happy.

“It’s the best feeling in the world right now,” he said.