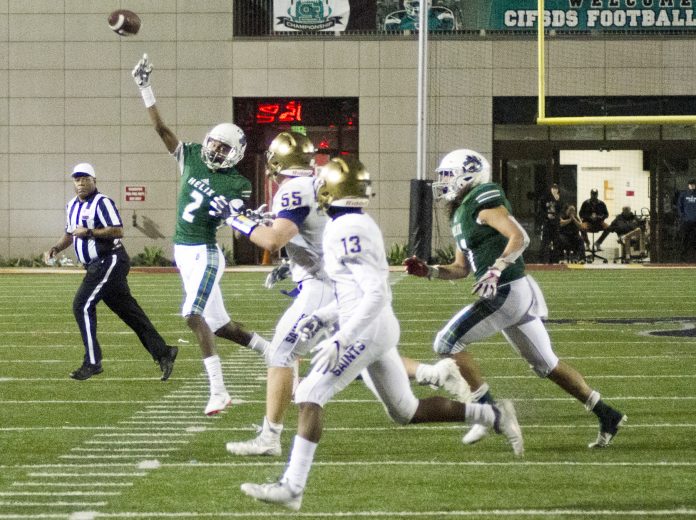 Helix junior quarterback Delshawn Traylor stood alone in the back of the end zone with his eyes shut and his head pressed against base of the goalpost.

The Highlanders had just scored on a 19-yard pass from junior receiver Timothy Christopher to senior receiver Chris Rivera and kicked the extra point to tie it 21-21 when head coach Robbie Owens accepted a running into the kicker penalty.

Helix junior quarterback Delshawn Traylor stood alone in the back of the end zone with his eyes shut and his head pressed against base of the goalpost.

The Highlanders had just scored on a 19-yard pass from junior receiver Timothy Christopher to senior receiver Chris Rivera and kicked the extra point to tie it 21-21 when head coach Robbie Owens accepted a running into the kicker penalty.

The point came off the board and the ball was moved to the one-and-a-half-yard line. Helix wanted to win on a two-point conversion.

Traylor lined up in the pistol formation a few yards behind the center and a few yards in front of junior running back Elelyon “Fatto” Noa. Just before the snap, the Highlanders switched to an empty formation with Traylor under center and Noa in the left slot, ready to sprint back to the right. The same play resulted in a one-yard Noa touchdown with 7:15 left in the first quarter.

“Coach Owens wanted to finish the game off,” Traylor said. “He’s a gutsy play-caller, so we tried to go sweep to Fatto. And I fumbled the ball. I dropped the snap.”

Owens told his players to hold their heads high in the post-game huddle. Afterwards, he pulled Traylor aside.

“Delshawn is one of our leaders,” Owens said. “Obviously the last play and the turnover, he’s taking that pretty hard. The biggest thing I told him is he’s got to use that as a motivator for him to lead this program into next year going into his senior year.”

For the outgoing seniors, however, there is no next year.

Shields ran for 36 yards on seven carries. His totals pale in comparison to Noa’s 24 carries and 146 yards, but Noa left the game in the third quarter with an injury. Though Noa would later return, Shields, Traylor and junior running back Xavier Hamlitt combined for 64 rushing yards on the game-tying drive that stretched across the third and fourth quarters. Traylor capped the drive with a 17-yard touchdown run with 8:34 left to make it 14-14.

Owens said he was comfortable sticking with the run-heavy game plan because Shields and Hamlitt played well when Noa missed two games with a concussion earlier in the season.

“Josh Shields and Xavier Hamlitt did a tremendous job carrying us through that drive,” Owens said. “We’ve got guys at Helix and when someone’s down we’ve just got to have the next man step up.”

The Highlanders needed all of their runners against the Saints. Helix ran 52 times for 229 yards and only threw six passes, completing two for 39 yards. Traylor did not attempt a pass.

“Saints did a great job,” Owens said. “They did exactly what we expected on defense and they took away the run game. We’ve struggled throwing the ball, we’ve been a little one-dimensional and they did a good job of putting us in that mode.”

“Their quarterback’s a guy who can make plays with his legs and he can sling it from all different arm angles so they’re just playing to their strengths,” Owens said. “We’re pretty stout up front. They knew they weren’t just going to line up and run the ball at us. You’ve got to give them credit, their staff did a great job of preparing them.”

St. Augustine sophomore running back Byron Cardwell ran for 72 yards on 17 carries with two touchdowns, including the game-winner in overtime.

“We’re distraught,” Shields said. “We could’ve had that one in the bag. We worked so hard in the summer, in the spring. Now we worked so hard and it just came down to one play.”

Nobody knew that better than Traylor.

When Traylor finally collected himself and rejoined his team, Owens was not the only person to pull him aside. Teammates did the same. His family came down to the field. A handful of faithful Helix fans shouted words of encouragement from the stands.

“It means the world,” Traylor said. “It was a tough loss, obviously, but it was nice to have the support and love and family that we have over here. I’m just ready to come back next year.”

One Year Later – Lessons learned from the pandemic: KEEPING IT...