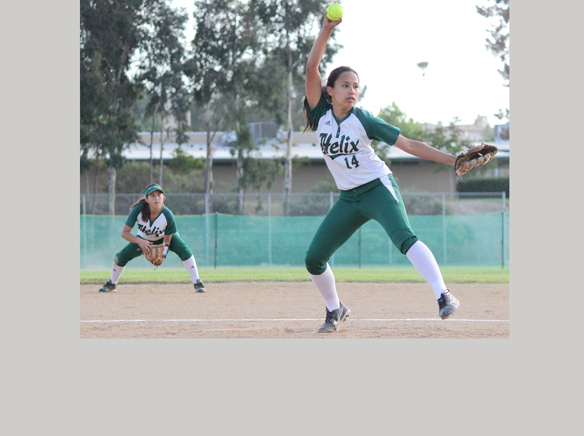 “I had a girl dive for the ball,” said enthusiastic coach Joseph Mendoza. “She didn’t catch it, but who cares? It was the greatest dive I’ve ever seen. If you go at life like that, you will succeed.”

Mendoza, who is head coach for Helix High School’s JV softball team, believes in a program that teaches more than winning and losing and his struggling squad of Highlanders have been proving just how important that lesson is.

“I had a girl dive for the ball,” said enthusiastic coach Joseph Mendoza. “She didn’t catch it, but who cares? It was the greatest dive I’ve ever seen. If you go at life like that, you will succeed.”

Mendoza, who is head coach for Helix High School’s JV softball team, believes in a program that teaches more than winning and losing and his struggling squad of Highlanders have been proving just how important that lesson is.

“Some girls have progressed really well,” said Mendoza following a loss against El Capitan last Wednesday, April 27, 2016. “It’s really fundamentals. You can teach it to them all day long, but it’s the mental pressure.”

This is Mendoza’s first year as head coach, but he has been assisting with the team for years. Coaching a girl’s team requires a certain level of humility and patience, said Mendoza.

“Criticize in private, praise in public,” he said.

Mendoza said today’s young people are constantly faced with pressures from their peers and parents that follow them as closely as their shadows or the phones in their pockets.

“High school is only four years of your life,” he said he reminds the girls. “Don’t put that much pressure on yourself. You can fumble through it. Learn to live with the fact that if you hit the ball as hard as you can, you still might not make it on base.”

“At the JV level, it’s all about developing players and trying to get them better so they can go play for a CIF title and a banner in the gym,” he said. “As far as the season has gone, the girls are just getting better. They’re showing a hundred and ten percent effort and that makes us happy. But it is positive just to get better and to have a love for the game and a love for each other.”

Mendoza said he takes it a step further.

“I’m not really concerned about wins and losses because I really believe that the only way that you can change the society that we’re in right now is to get these kids to believe in themselves so that they will compete for everything else,” he said, adding that softball is “just for fun.”

“These girls are in high school,” said Mendoza. “They get their hearts set on something and something doesn’t go right and they think they’re a failure. And if nobody’s picking them up when they fall, it’s hard. It can be really tough on them.”

And for some of Helix’s Scotties, Mendoza said, the softball program is the only place they find that steady hand.

Mendoza said El Capitan’s program seems to be headed by similarly minded coaches and that he was impressed with the way Millsap and the other coaches worked with the Vaqueros.

“I love each and every one of the girls,” she said. “They’re great, amazing players and I love all of them. I know that my team has my back and we’re just like a big family.”

It is a camaraderie that Mendoza said he hopes to see within his own team. He said he wants to see informal leaders stand up and model good behavior and good friendship.

“The attitude you come with, the way you treat your teammates, the way you pick someone up when you see they’re having a bad day is all important,” he said. “If you are doing that now, you’ll do that for the rest of your life. That’s what this is supposed to be about.”

Millsap said El Capitan hopes to finish their last few season games with wins. Mendoza, whose 8-8 club is still struggling to pull their play together, said he hopes to begin a new chapter for the girls in his program.

“Let me open your tunnel vision,” he said. “Not just so you can play softball, but so that you can have a chance at life.”

Helix Charter senior Jaden Forester is a man for all seasons

Torreys trip up Sultans, 38-24, with big second half rally