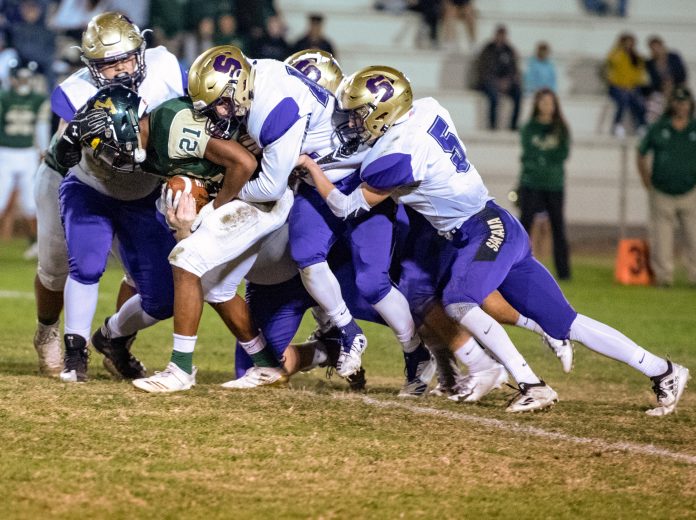 When Santana played Mar Vista in the regular season, the Sultans’ sideline looked like an infirmary.

Now the Sultans are back at full strength in the playoffs, and it showed in their 23-6 win over the Mariners Friday night.

Junior quarterback Nathan Temple missed seven games with a broken collarbone this season, including the 27-13 loss to Mar Vista on Sept. 21.

When Santana played Mar Vista in the regular season, the Sultans’ sideline looked like an infirmary.

Now the Sultans are back at full strength in the playoffs, and it showed in their 23-6 win over the Mariners Friday night.

Junior quarterback Nathan Temple missed seven games with a broken collarbone this season, including the 27-13 loss to Mar Vista on Sept. 21.

“We didn’t have as much confidence going into the game,” Temple said. “We lost a couple players, didn’t have the spirit. Now we had it all here, executed perfectly and came out with the win.”

Although Temple was only 9-for-24, he racked up 140 passing yards and 44 rushing yards with a touchdown on the ground. Head coach Tim Estes said Temple’s mere presence under center — and the threat of throwing deep — opens up the offense.

“They had to spread out and they couldn’t load everybody up in the box like they did last time against us,” Estes said. “I take my hat off to Mar Vista. Their guys do a great job, but with us being able to run and throw, it spreads them out.”

Santana led 7-6 with 4:10 left in the second quarter when senior Chaz Baker returned a punt for a 57-yard touchdown and a 14-6 lead.

“It was basically the changing point of the game,” Baker said.

The Sultans defense stepped up after the punt return. They stopped the Mariners on every third down after the return, recovered two fumbles and intercepted a pass.

Junior defensive end Luke Simanek disrupted the backfield all day and was credited with a half sack. He said the Sultans’ improved health was evident against the Mariners – Simanek missed the regular season game against Mar Vista.

“One of the biggest differences, I personally wasn’t sick,” Simanek said with a wry grin. “Also, we set up a new scheme with our okie formation and our base formation. We would switch in and out which gave us an advantage over their run.”

Temple said watching the Sultans from the sidelines helped motivate him in his return.

“It really sucks,” Temple said. “It hurts your heart, honestly, just sitting there on the sidelinewishing you could be out there with your brothers fighting for wins and fighting for your team.”

Temple returned in the regular season finale against El Cajon Valley. In the first round of the playoffs, he led the Sultans with a record-breaking performance.

Estes said the Sultans could be dangerous if they can pair their offensive potential displayed against La Jolla Country Day with the suffocating defense that shut down Mar Vista.

“I don’t think we’ll ever put up 76 points again,” Estes said. “I mean that’s just kind of a fluke thing that happened, but I think it’ll be a lot of fun next week. I know San Diego High’s having a great season, they had one last season too. They’re well coached and I think it could be a good game.”

Santana plays at San Diego 7 p.m. Friday in the CIF San Diego Section Division IV semifinals. The winner plays on Nov. 23 at 1 p.m. in the championship game at Southwestern College.“We’re feeling awesome,” McIntyre said. “We made it a goal last year when we got knocked out of the playoffs to come back and get a ring. From the beginning of the season we worked so hard to get to this point, and it paid off.”

Too bad that ring does not come with a key to the locker room.