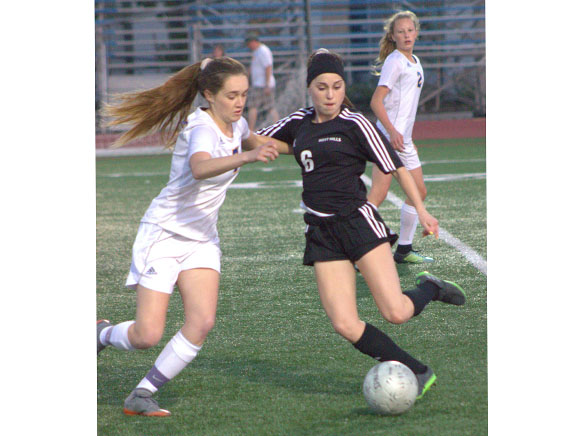 The Grossmont Hills league is heating up as soccer sensations battle for end-of-season wins.

West Hills is currently leading the league 4-0-3, but head coach Robert Romero said it has been a close season.

“We’ve been hanging on by a thread,” he said. “I think our league is one of the more competitive ones. Each of our games have been very close.”

The Grossmont Hills league is heating up as soccer sensations battle for end-of-season wins.

West Hills is currently leading the league 4-0-3, but head coach Robert Romero said it has been a close season.

“We’ve been hanging on by a thread,” he said. “I think our league is one of the more competitive ones. Each of our games have been very close.”

Valhalla (3-3-0) and Granite Hills (2-3-1) have both had competitive seasons, and the long-time league powerhouse Steele Canyon (2-2-3) falls closely behind the Wolfpack on the standings with just one game left in regular season. Even Grossmont, trailing 1-4-1, has had a pretty good year considering the inexperience of their team and their transition to new leadership under head coach Fernando Ramos.

“Overall, I believe it’s good soccer that we’re trying to play,” Ramos said. “I think my expectation is that if we continue to work hard, and we are, we should be able to get a better turnaround in league. It’s been really good games so far and, at the end of the day, if we see progression and development, that’s a win already.”

Grossmont tied West Hills on Feb. 6, after taking a lead early in the second half. The Wolfpack came back with a goal seven minutes before the whistle to tie the match, 1-1, but Grossmont’s unflappable persistence undeniably had West Hills concerned.

Senior Foothiller Kamryn Correll said the game was a good one to pocket away.

“As a team, we played really well,” she said. “The score is what it is, but I think my team went home with a win tonight. We played together, kept our composure and kept shots on the net.”

Romero said the Wolfpack has managed to find ways to win or tie their games just under the wire, but it has been a fight all season to stay on the top.

“There’s always that concern going into the game — we’ve had a few major injuries, some kids are completely out of the season,” said Romero. “But you’ve got to find the next player who can do the job and hope that they step up. I know my team, they can be really, really good or we can be off in certain moments and make critical mistakes. I just hope they go into every game knowing it’s going to be tough.”

The Grossmont Hills league is one of the more competitive girls soccer leagues in San Diego, said Romero, and it is a challenge to stay consistent.

“You have Steele Canyon who has won a lot of league championships, and now that all the teams are very good they challenge each other,” he said. “I told [my team] from day one, every single team in this league can beat anybody on any given day.”

But the end of the regular season will commence the beginning of the East County alliance. The Grossmont Conference is a hotbed of soccer talent and Romero and Ramos both hope to bring that to postseason. As long as they are not facing each other on the field, Romero said the Hills league teams will be supporting each other in playoffs.

“We’re always rooting for the East County teams to knock off the North County teams or whoever,” he said. “We all root for each other.”