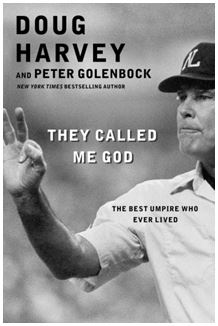 When Kirk Gibson of the Los Angeles Dodgers hit the famous “I can’t believe what I just saw” home run to win Game One of the 1988 World Series, San Diego’s Doug Harvey was standing just a few feet away as the home plate umpire.

When Kirk Gibson of the Los Angeles Dodgers hit the famous “I can’t believe what I just saw” home run to win Game One of the 1988 World Series, San Diego’s Doug Harvey was standing just a few feet away as the home plate umpire.

In a career which landed him in the National Baseball Hall of Fame in 2010, Harvey was there serving as an umpire for five World Series, seven All-Star Games, and numerous other history-making events, serving a 31-year career at one of the top rated on-field officials in the National League.

Harvey will recall many of his stories from 4,673 career MLB games when he conducts a book signing for his recently released autobiography, “They Call Me God” (Gallery Books).

The personal appearance will be held at Al’s Sports Shop on Mission Gorge Road on Thurs., Apr. 25, from 4-6 p.m. Copies of Harvey’s book will be available to the public; all proceeds will go to charity.

As the 10th umpire to be enshrined in Cooperstown, N.Y., Harvey was consistently rated among the best in baseball history.

In 1999, the Society for American Baseball Research ranks Harvey as the second-greatest umpire in history, behind only Bill Klem. In 2007, Referee magazine selected him as one of the 52 most influential figures in the history of sports officiating.

He attended San Diego State College in 1955-56, where he played baseball and football. He then returned to umpiring in the minor leagues while also officiating college basketball and football games. He remained a resident of San Diego throughout his umpiring career. wearing uniform number 8 for most of his revered career.

Despite the local roots, Harvey was still respected enough to be crew chief for the 1984 World Series, which saw the San Diego Padres make its first appearance, eventually falling to the Detroit Tigers in five games.

Harvey felt that his introduction of a new sense of timing to umpiring was his greatest contribution to baseball.

He noted that when he arrived in the major leagues, the emphasis was on making calls quickly and decisively.

“Everything was called too quickly,” said Harvey. “I’ve got a photograph of Jocko Conlan working first base. Jocko’s arm was extended in the out call. But the runner was still short of the bag, and the ball was still in flight. In those days it was common to anticipate the call.”

Harvey, however, changed attitudes by insisting that it was better to delay the call and make sure it was correct.

Such attitudes made Harvey a popular choice among ballplayers and managers, even when they disagreed with a call.

His book, which features stories from throughout his career, also includes his post-career life when he battled oral cancer from the use of chewing tobacco.

He also writes about his five basics on umpiring, his “20-second Rule,” how he gained the mighty nickname of “God,” his views on Pete Rose, both then and now; plus much more.