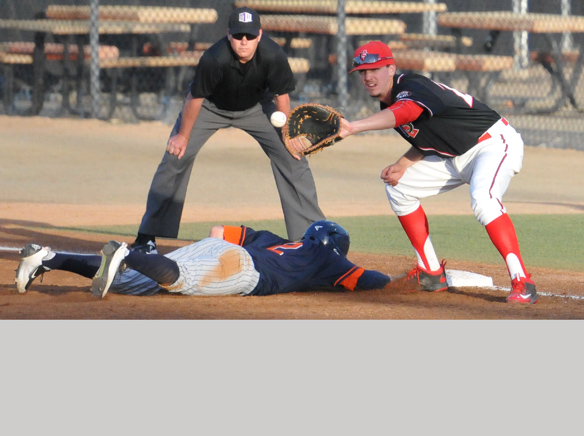 His sophomore season, Granite Hills placed runner-up to Rancho Bernardo in the Open Division final by a score of 3-1. The Eagles were back the next year in the title game against La Costa Canyon and won 3-0.

His sophomore season, Granite Hills placed runner-up to Rancho Bernardo in the Open Division final by a score of 3-1. The Eagles were back the next year in the title game against La Costa Canyon and won 3-0.

“Our sophomore year, we got CIF runner-up patches,” explained Verdon, who also played two years of water polo (2012-13) at GHHS and was voted the team’s most enthusiastic award winner. “We put them in our lockers all year as motivation. We made it back and won the championship.”

Verdon was a career .340 hitter with the Eagles and wrote his name in the record book with 134 career hits, second in school history.

A first-team all-league selection as a senior, a second-team all-league honoree as a junior and the team’s rookie of the year as a freshman, Verdon gained attention in the annual Major League Baseball amateur draft. The New York Mets selected him in the 24th round of the 2015 draft.

But the Granite Hills standout elected to play college baseball instead. He is concluding his freshman season at San Diego State University as one of the Aztecs’ starters. He is hitting .270 after starting 49 of 51 games with 25 runs scored, seven doubles, one triple, two home runs and 24 RBI.

“I’ve always been a big school guy,” Verdon said in regard to why he chose college baseball over instant money in the minor leagues. “I’ve always had good grades. I wanted to study kinesiology, so I thought it was a good idea to stay and play here. My goal is still to play pro ball.”

Then it’s off to the conference championship tournament May 25-26 at the University of New Mexico in Albuquerque.

“We are hoping to turn our season around at the conference tournament,” the six-foot-three, 190-pound Verdon said optimistically.

While SDSU’s season has been disappointing from the team standpoint. Verdon has recorded several personal highlights. He hit his first home run in the team’s fourth game of the season, which turned out to be the team’s first win of the season as well.

“I can still remember it,” Verdon said. “It was a 1-1 fastball in a game at Irvine. It was our first win. I got my first career home run and first college win. It was crazy.”

For players coming right out of high school, Verdon said there are adjustments that need to be made in adapting to and flourishing at the collegiate level.

“It’s not so much the speed, it’s adjusting to the pitching, the off-speed pitches,” explained Verdon, who was a member of the Random Acts of Kindness Club at Granite Hills. “In high school, not a lot of pitchers can consistently throw a variety of pitches.

There are other differences between the game at the high school level and at the Division I collegiate level.

“On every high school team you have four or five or six guys who are really good,” Verdon said. “At this level, everyone on each team is just as good as you are or better.”

SDSU is currently in sixth place in the conference standings and hoping to overtake fifth place Air Force in an effort to avoid the play-in game at the upcoming conference tournament.

Verdon is not the only former East County prep player on the 2016 Aztecs.

Freshman pitcher Kenny LaPierre, from Alpine, also played at Granite Hills High School. As a senior, he earned honors as the Eagles’ Pitcher of the Year while also receiving first-team all-league honors. As a senior, he posted a 1.87 ERA with 53 strikeouts and 19 walks over 67 innings.

LaPierre has appeared in two games this season for SDSU with a 0-0 record.