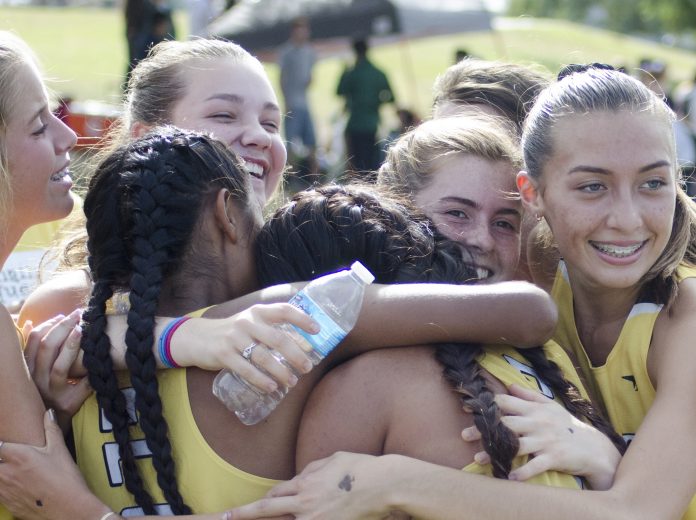 In the agonizing moments between the end of the race and the results being posted, El Capitan’s girls cross country coach Tyler Ludwig did not want to overplay his hand.

Four Vaqueros finished in the top 15 of the Girls Division III race at Friday’s CIF San Diego Cross Country Finals, but the team totals were still being calculated when Ludwig took his superstitious precautions.

In the agonizing moments between the end of the race and the results being posted, El Capitan’s girls cross country coach Tyler Ludwig did not want to overplay his hand.

Four Vaqueros finished in the top 15 of the Girls Division III race at Friday’s CIF San Diego Cross Country Finals, but the team totals were still being calculated when Ludwig took his superstitious precautions.

“No jinxes,” Ludwig said. “I’m a superstitious guy. Everybody else isn’t, they’re trying to tell me to keep my head level.”

El Capitan’s girls celebrated their first CIF championship since 1993 when the results were finalized and not a moment sooner. The Vaqueros finished with 68 points, just nine ahead of second-place University City.

“It was the best feeling ever,” junior Daisy Tamayo said. “This is my first year in cross country and I didn’t think I could do something like this, so it’s pretty great.”

Each one of them had a stamp of a different playing card suit on their hands.

“We gave our top four girls the nickname of the Four Aces because they’ve been running really close together as a solid four all season long,” Ludwig said. “They each got a suit and identified with it and went out to kick butt.”

Freshman Sofya Chernyak was the Vaqueros’ fifth scoring runner, placing 37th with a time of 21:17.80.

“We knew we had a good chance of making [state] as a team, but very slim that we’d win,” she said. “Watching the guys gave us an encouragement to do well and just run our hearts out like we all did.”

The Vaqueros boys’ team ran away with the lead in its race by placing all five of its scoring runners inside the top 20.

Machnov has been dominant all year, winning every race except for two. He said he let off the gas early in one, and Sager passed him. He also lost to Grossmont senior Jonathan Rodriguez-Gomez, who finished fifth in the Boys Division II race, in a dual-meet against the Foothillers. Machnov and Sager are friends with Rodriguez-Gomez once they cross the finish line.

“When race time comes you’ve got to compete,” Sager said. “You’ve got to treat each other like you need to beat the other person. But off the course, we’re just great friends. It’s amazing because cross country is just like, you can build so many bonds in high school.”

The girls also had their fair share of sportsmanship. While waiting for the results, the Four Aces congratulated University City senior Ella Ruff on finishing sixth in the Girls Division III race.

“It’s great knowing that you have friends that you also compete against,” Calvert said. “You just are always there pushing one another, helping each other get better.”

Of course, the coaches were also doing everything in their power to help the teams improve. El Capitan boys cross country coach Jeff Hines said Ludwig was even trying to tap into other-worldly powers with his wardrobe.

“[Ludwig] forgot his belt at conference and we won everything at conference — boys, girls, lead boy, lead girl,” Hines said. “So he said, ‘I wore the rope for my belt then, so I’m going to wear it today.’ So it was good luck.”

Or maybe luck is just easier to come by with aces up the Vaqueros’ sleeves.