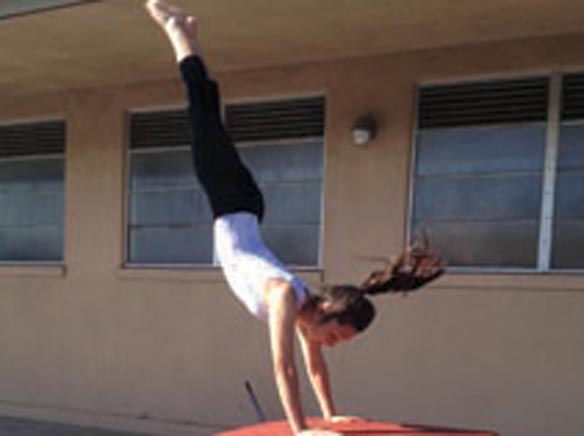 When freshman Karina Pulido stepped into the gymnasium for the first day of practice, El Cajon Valley High gymnastics coach Christina Holland did not know what to expect from her.

When freshman Karina Pulido stepped into the gymnasium for the first day of practice, El Cajon Valley High gymnastics coach Christina Holland did not know what to expect from her.

“I didn’t know Karina by face, but was given a head’s-up about her from the (school) administration,” said Holland. “She came in and introduced herself, then told me she had experience so I gave her the book of compulsory routines and said, ‘Show me what you’ve got.’”
And after about about five minutes.
“She did!…it was impressive,” added the coach.

only was Pulido experienced, the 15-year-old will be the favorite when West Hills High hosts tonight’s (Thurs., May 9) Grossmont Conference Gymnastics Championships,
“Karina hasn’t lost a meet all season,” Holland added about her all-Grossmont Valley League performer. “Her scores have been the highest all season.”

Pulido started on the tumbling mat at age 4, but eventually needed to step away from the sport she loves.
“When I was 12, I got hurt doing a dismount — it was a round-off, back handspring layout for my YMCA club team in the South Bay,” she recalled. “Since then, I really haven’t done too much, but when I heard there was a gymnastics team here, I had to tryout.”

Pulido’s scores currently rank at the top of the GVL charts, with a high of 37.40 points in the all-around in a recent GVL dual meet against El Capitan.

“And she’s had more than three scores of 9.00 this season,” added Holland, a New Jersey native now in her fourth season directing the Braves. “So no matter how she does in league, she’s already automatically qualified for the CIF championships.”

The San Diego Section finals will be Fri., May 17, at La Costa Canyon High in eastern Carlsbad.
“Coming back was like starting all over,” noted Pulido.
Added her coach,” But it’s like riding a bicycle — it all came back to her rather quickly.”

Pulido calls floor exercise her best event, but her scores in the vault, balance beam and uneven bars are equally impressive. Her goal for next season is to jump from a Level 7 gymnast and join the Level 8 girls in the optionals category.

“I just need to conquer my fear on my flyaway dismount on the bars,” she noted. “When I am able to do that, then I can give them a battle.”

Pulido is also a member of the Braves soccer team. This past winter, she earned a second-team berth on the All-Grossmont Valley League team at left wing. She also plays soccer for the new girls’ team with the YALLA soccer club.