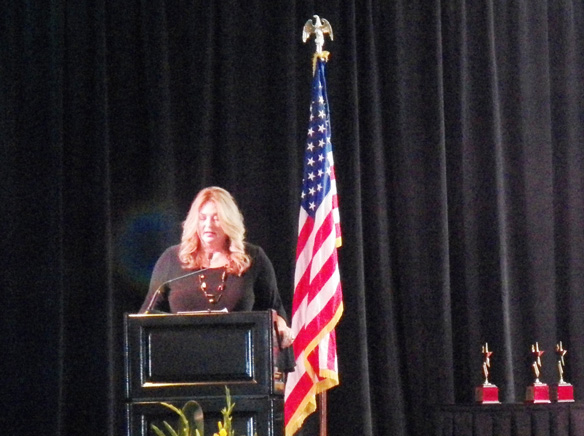 Over 80 women leaders from around San Diego were nominated. Eight were selected for special recognition at the San Diego East County Chamber of Commerce’s 15th annual Women in Leadership Luncheon on Sept. 22. The midday awards event was held at the Town and Country Resort Hotel in Mission Valley.

Over 80 women leaders from around San Diego were nominated. Eight were selected for special recognition at the San Diego East County Chamber of Commerce’s 15th annual Women in Leadership Luncheon on Sept. 22. The midday awards event was held at the Town and Country Resort Hotel in Mission Valley.

The East County Chamber’s Leah McIvor opened the program, acknowledging the “special women” being honored for “leading in the community.” McIvor was taking to the podium for her final turn serving as chairwoman for the WILL luncheon event, closing out six years of service in the role. She received praise and accolades herself for participating in leadership, alongside the 2017 honorees.

Mistress of ceremonies was Lee Ann Kim. Featured keynote speaker was Jenny Amaraneni, co-founder and CEO of SOLO Eyewear. Amaraneni’s company manufactures eco-friendly sunglasses made from recycled materials, returning 10 percent of profits to worldwide vision aid programs. Amaraneni studied for her MBA at San Diego State University, knowing that she wanted to start a business that would “make a difference in the world.” She said that she immersed herself in entrepreneurship. For others considering a business start-up, she advised, “Ask what makes you come alive.” What struck Amaraneni was a disturbing statistic she heard, that four out of five people with vision loss do not need to be blind, because 80 percent of blindness around the world is entirely preventable or remediable. Her enterprise’s efforts have resulted in over 13,000 people having their vision restored. Her company’s motto is “Live and give.”

Kelly Anderson represented her mother, Mary Jean Anderson, on behalf of event Diamond Sponsor Anderson Plumbing, Heating & Air, with brief comments as the formal program continued, speaking fondly of her mother’s leadership in a “male-dominated industry” as one of the local women “leading in high heels.”

The first award recipient called to the stage was Bonnie Rush, who was given the first-ever Michele Tarbet Award. Tarbet became CEO of Sharp Grossmont Hospital in 1996 and was a major supporter of the WILL event from its inception. She initiated outreach and awareness of breast cancer screenings, before succumbing to the disease in 2014. Rush spoke with deep affection and respect of Tarbet, saying they were “bosom buddies” in mammography efforts. In 1998, Rush founded Breast Imaging Specialists, contributing to early detection and advanced screening techniques for women with “dense breasts,” which she said offer the “double whammy” of increased risk and harder detection of the illness.

Marla Black was next up for recognition, for her work with Junior Achievement of San Diego County since September 2015. Black’s earlier career involved 35 years in banking and financial services. Black grew up in El Cajon. She noted, “Women play a vital role in our communities.”

Another honoree was Michelle Bergquist, co-founder and CEO of Connected Women of Influence. Among Bergquist’s other accomplishments, she was a founding partner of Women Lead Publishing and a co-founder of Successful, Unstoppable, Empowering, and organization known as “SUE.”

Other award recipients from the medical service industry included Wendy McKinney, who joined the local American Red Cross chapter in 2015. McKinney acknowledged the WILL event, “Here we lift up women, as we lift up each other.” She went on, “You are making the world, San Diego and East County better places.”

Barbara Ryan of Rady Children’s Hospital and Van Tran of Sharp Grossmont Hospital were honored for their leadership roles in medical services.

Kristine Costa was recognized for her work on behalf of the community through her position with Waste Management, Inc. Representing the education sector, Martha King took home an award for her service in co-founding King Schools..

All of the speakers and award recipients spoke with humility, citing associates, friends and family members for supporting their leadership training and achievements.

The full list of 2017 Women in Leadership Luncheon award recipients is as follows: