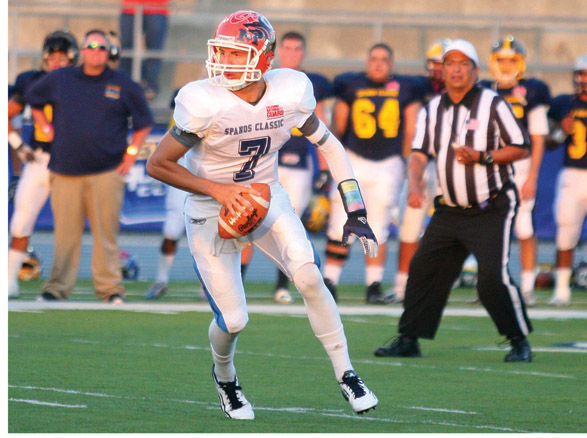 The game, which took place at San Diego Mesa College and benefitted the High School Sports Association of San Diego County, served as a final showcase in front of family and friends for the county’s graduated seniors as they head off to their respective colleges.

Romano, a multi-sport standout for the Norsemen, is headed to the University of Michigan to play baseball. However, he also proved he could play football by earning first team all-San Diego Section honors last fall.

The 6-foot-3, 190 pound Romano, who served as the South team’s offensive captain, passed for 3,415 yards and 30 touchdowns to lead Valhalla to the semifinals of last year’s Division II football playoffs.

During the spring baseball season, he hit .356 with two home runs and 15 RBI while playing shortstop.

The Chicago Cubs made him a late round selection in June’s amateur draft; he ultimately elected to play college baseball.

Mills opened scoring in the contest with an 11-yard TD catch and later hauled in a 13-yard scoring strike.

Fuga registered three sacks in the game while Milo, a 290-pound lineman, scored on a six-yard run to boost the South to a 21-0 halftime lead.

Tuff closed out scoring in the game on a 43-yard run in the fourth quarter while  Galkoski had one interception — one of four picks overall by the South squad.

The South team registered five takeaways overall in the game.

On one play in last Friday’s game, a hard hit by Fuga knocked off the helmet of North running back Deon Dickey of La Costa Canyon.

Romano appeared in four series during last Friday’s game, all of which resulted in scores by the South team. He finished the contest with 158 passing yards in sharing signal-calling duties with Mater Dei Catholic’s Joseph Legerrette-Luke and Hoover’s Dionte Whitfield.

“Ramsey is such a natural athlete,” Valhalla football coach Charles Bussey said. “Even though he hadn’t picked up a football since last season, he was still able to sling it down field. He’s going to play baseball in college and I’m happy for him but he could easily have played football if he wanted to.”

Mills caught 59 passes for 762 yards last fall. Bussey feels Mills has yet to reach his potential.