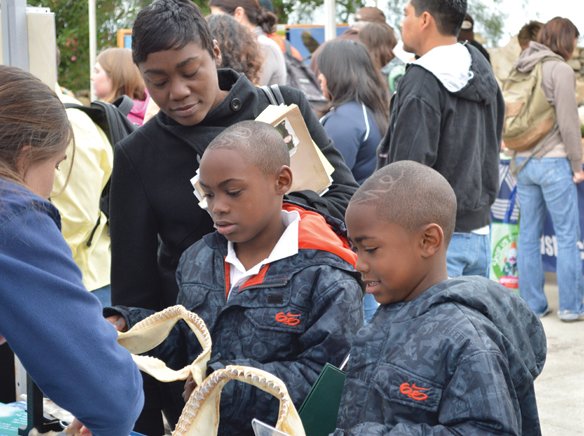 Scavenger hunts, endangered species art contest for children, how to crochet with recycled bags and a close up look at some of the region’s wildlife were just a few of the things to see at East County Earth Day.

Scavenger hunts, endangered species art contest for children, how to crochet with recycled bags and a close up look at some of the region’s wildlife were just a few of the things to see at East County Earth Day.

Set atop Mt. Helix, the 4th Annual East County Earth Day attracted hundreds of people on Sunday, a precursor to the county’s celebration this weekend. Eco-friendly vendors, businesses, environmental conservationist and San Diego County’s well-known environmentally conscience attractions gathered together to inform and educate people on ways to help preserve and protect the wildlife and environment of the diverse ecosystem that the region has to offer from the ocean to the desert.

Filled with live entertainment, the event included interactive clues and a scavenger hunt for kids and adults people learned about the effects of pollution, extinction of local wildlife, and eco-friendly cars in hopes to preserve the region for generations to come.

Peggy Junker, Earth Day coordinator said the turnout was the best the event ever had and that the community pulled together to make the event possible. Nearly 40 people volunteered their time to make it happen, many of them come back year after year, and this event would not be run as well as it is without the work of these volunteers, she said.

“Our committee members are all integral members of this community and they all believe in Earth Day,” said Junker, “And helping everybody figure out a sustainable way to live as a community.”
Marion Stacy, licensed by the State and Federal government for 30 years as a hummingbird rescuer, had a display of hummingbirds and spoke about their protection, nature and mating cycles. At the amphitheatre, San Diego Zoo educators Robyn Foster and Kindra Maples provided the audience a close-up view of the “misunderstood possum,” the tiny western screech owl that blends perfectly in with tree bark and the endangered pine seed eating thick-billed parrot, now only found high in the mountain pine forest of northern Mexico.

Cindy O’Grady, Lakeside River Park Conservancy volunteer, said the project is an effort to restore part of the San Diego River back to its natural state.

“The Conservancy acquired a parcel right off Channel Blvd. in Lakeside in 2001 and has restored a mile-long walking path right next to the preserve,” said O’Grady. “We are looking forward to our 6th Annual San Diego River Run 5k Run and Walk on May 18, giving people the opportunity to see what a beautiful diversity the San Diego River has to offer.”

A white barn owl perched at the, Chula Vista’s Living Coast Discovery Center as David Neffen, docent, showed off the Center’s resident American kestrel falcon. Tina Matthias, volunteer and field trip coordinator, said it was wonderful being a part of East County Earth Day, as she passed out scavenger hunt clues, sending kids throughout the exhibits, learning as the hunted.

“It’s awesome to be here,” said Matthias. “I love the clues, the scavenger hunt and the kids. It is very interactive for them as well as educational.”