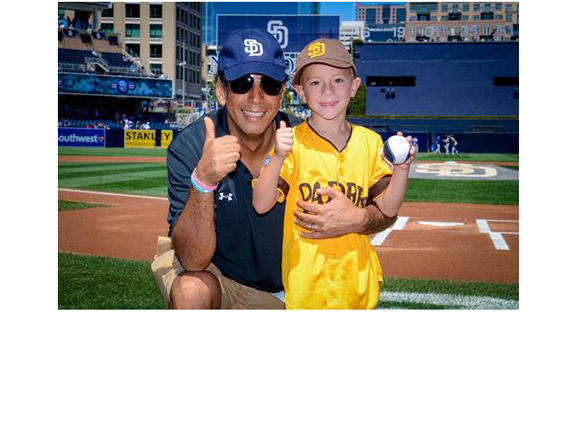 Every child deserves a clean, fresh slate in life. That thought crept somewhere in the back of Jaimie Kurtz’s mind as she prepared to deliver her firstborn son six years ago.

Every child deserves a clean, fresh slate in life. That thought crept somewhere in the back of Jaimie Kurtz’s mind as she prepared to deliver her firstborn son six years ago.

When her child was at 13 weeks of gestation, Kurtz received news she said was “devastating.” Prenatal testing showed that her boy suffered from gastroschisis, a condition in which a hole in the abdominal wall allows intestines to protrude outside of the body. The relationship in which she and her partner had chosen to get pregnant ended. She was self-employed as a hairdresser and real estate agent. And her son was expected to require an extended stay in the neonatal intensive care unit (NICU) immediately after his birth.

The pair had a rocky start as mother and son alone. But Dominic is now a happy, healthy 6-year-old, just two weeks into this season’s soccer league play. His mother married in October 2014, is now Jaimie Kurtz-Prowse, and Dominic is a “wonderful big brother” to the family’s newest arrival, Drake, who is 6 months old.

Jaimie and Dominic were celebrated guests at the San Diego Padres baseball game on Sept. 6, when Dominic assisted in throwing out the game’s first pitch with Dr. Sean Daneshmand, founder of the Miracle Babies charity, which assists needy NICU newborns like Dominic and their families. A few days before the event, Dominic disclosed that he was excited about appearing and that he prefers throwing “a really fast pitch.” His mother added that he has a special affinity for the local professional baseball team because his T-ball team from Mission Trails also goes by the nickname of the “Padres.”

She was encouraged, though, by the 90 percent success rate for treating her son’s congenital defect.

“I was very positive, very confident in my doctors,” she said.

Still, hers was a high-risk pregnancy, with a NICU team standing by in the delivery room. After delivery by caesarean section, Dominic was rushed into the NICU at Kaiser Hospital on Zion Avenue.

A spring in Dominic’s belly began the treatment procedures, with his then-external intestines suspended in a “silo” above his abdomen. By Wednesday of the week following his birth, the organs were relocated internally. Two days later, the abdominal hole was closed. But getting Dominic to nurse normally was more difficult. At two weeks. He could take in only one milliliter of breast milk at a time.

“He didn’t want to eat,” his mother said.

For then-Jaimie Kurtz, her hospital stay was nearly over when a woman from Kaiser’s finance department stopped by her room to discuss payment of the $1,000 bill for the caesarean delivery. Unaware of Dominic’s guarded recovery in the NICU, the finance official gushed over payment arrangement assistance to help with “the happiest day of your life” for Kurtz to take her new baby home. During their subsequent discussion, the woman took in details from Kurtz about circumstances for this new mother and her son. Kurtz had had Kaiser medical insurance coverage for a long while. Dominic’s coverage status was problematic, however.

The woman put Kurtz in for consideration with the Kaiser Foundation, which helps patients and families in difficult financial straits. The foundation wrote off Dominic’s entire NICU bills and agreed to pay three months of co-pays and prescription costs. “I never saw a bill,” said Kurtz-Prowse.

Dominic would not be going home, though, until he was digesting enough nutrition. He required feeding through a nasogastric tube every two hours, of which he digested only about half his intake. When he was 6 weeks old, his mother attempted breast-feeding him. She said that she suffered something of a “meltdown” over being apart from her newborn son, so when he was seven weeks old she settled on the “make or break” decision to take him out of the hospital.

She felt both “relieved and scared” at finally being alone with him, thinking “uh oh.” But the feeling went away. In the relaxed atmosphere of their home, Dominic began breast-feeding naturally. Frequent weight checks at the hospital confirmed that he was on the way to normal development. Kurtz breast-fed Dominic until he was 25 months old.

On the day she brought Dominic home, with her infant lying on her chest, the pair watched KUSI morning news on television together. One particular segment captured Kurtz’s attention. Dr. Sean Daneshmand was interviewed about his new nonprofit organization, Miracle Babies, a group providing financial assistance to NICU families, which he formed during the same month and year in which Dominic was born. Kurtz thought this was serendipity, because during her own ordeal she had “wished there were an organization to help.” Kurtz determined to volunteer once she and Dominic were sufficiently settled.

Miracle Babies helps with meeting the basic financial needs of NICU families. Kurtz-Prowse volunteers however she can “behind the scenes,” including as a reviewer of applications for assistance. Her hope is that the organization can grow to the point of performing errands on behalf of NICU families. “The last thing on your mind when you have a baby there is paying your rent and utility bills and buying groceries,” she recounted.

Miracle Babies stages fundraising events throughout the year. The next will be the charity golf classic later this month. Another is the annual fall gala, coming in October, with a “Moonlight in Casablanca” theme for partygoers. A 5K fun run will take place the first week in May 2016. To learn more about Miracle Babies, visit www.miraclebabies.org.