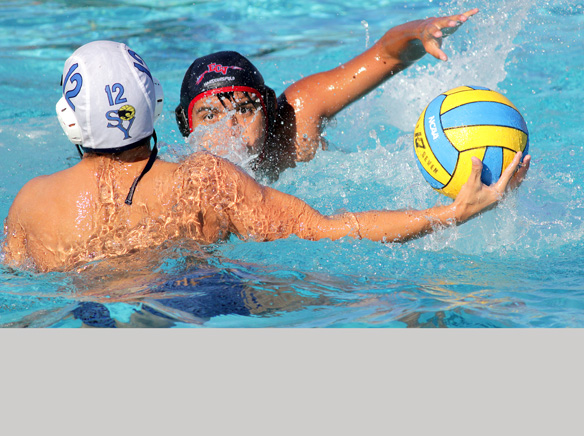 Pain. That is what it takes to build a water polo team, said El Cajon Valley’s Head Coach Veronica Ortega.

She would know. A former Brave herself, Ortega commutes from Oceanside to coach the boys water polo team, which, she said, is by all accounts in the rebuilding stage.

Pain. That is what it takes to build a water polo team, said El Cajon Valley’s Head Coach Veronica Ortega.

She would know. A former Brave herself, Ortega commutes from Oceanside to coach the boys water polo team, which, she said, is by all accounts in the rebuilding stage.

“It’s the beginning of the year, we have a lot of growing to do,” said Ortega after a non-conference game against San Ysidro High School on Sept. 8. “There is so much potential for growth for us. We’re small, but El Cajon was a great water polo team for many years. We’re trying to build it back up again.”

The match against San Ysidro’s Cougars was choppy. Taking an early lead, the Cougar offense proved to be aggressive and agile, scoring three points in the first minute of the game. By the end of the second quarter, San Ysidro was decisively ahead, 13-3.

Braves goalie Lorance Hanna came into his own in the second half, but the damage was done. El Cajon never recovered from the 10-point deficit and gave up the win, 16-6.

Braves junior Armando Cardenas said he expected more from himself and the team.

“We didn’t play like we practiced,” he said. “We had some ups and downs. Honestly, they (San Ysidro) were pretty good. I got shut down.”

Despite the tough match, Cardenas said he is optimistic about the season.

“We’re going to play hard, apply the things that we’ve practiced, and give it all we got,” he said. “We’ve got new people but we know how to play.”

San Ysidro’s Head Coach Giancarlo Nencini said his team is rebuilding as well, so the setup was ideal.

“I was a good opportunity for the kids to get in some game time and also be able to work on some of the things we’ve been practicing,” he said.

Ortega said the Braves see a lot of South Bay teams in preseason because they are all predominantly D3 teams. This game might have gone better for El Cajon, she said, if they had been playing with a full roster.

“We have several players who we are getting back at the end of the month and that will make a huge difference,” she said. “Unfortunately they’re ineligible (right now).”

With nearly 14 years of coaching experience, Ortega began her second season at El Cajon Valley determined to reshape the program.

Ortega said she believes her team can grow into the best kind of athletes.

“Effort, expectation, attendance, self-belief, self-motivation,” she said. “Those attitudes are contagious. It takes a while, but a mentality change will happen. I commute from Oceanside because they’re worth it and they’re going to change.”

The Braves have a home game against San Dieguito Academy on Sept. 15. Their next conference game will be at El Capitan on Sept. 27.

Women of Steele running to top of cross-country chart