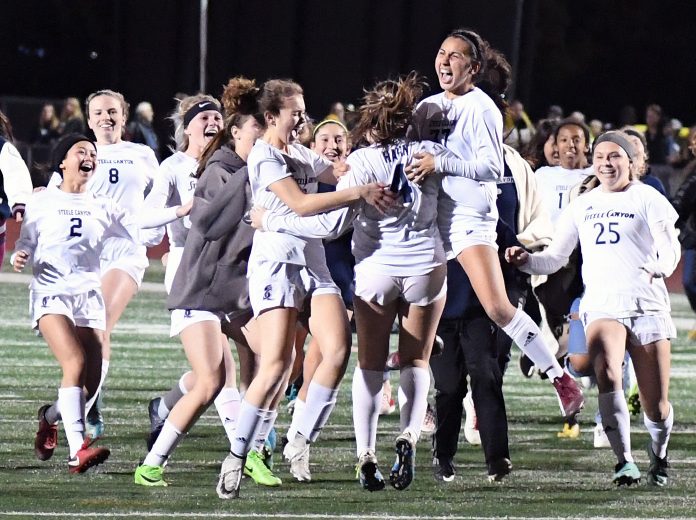 The Steele Canyon High School girls soccer team has been knocking on the door for the past few seasons, reaching the championship round of the San Diego Section playoffs only to fall short of the end goal.

Last Saturday at Mission Bay High School, the Cougars finally kicked down that door to win the school’s first CIF title in the sport after outlasting rival Eastlake High School in a kicks-from-the-mark shootout tiebreaker.

“It means everything to us,” Steele Canyon head coach Charlie Cleaves said of his team’s newly acquired Division I championship. “We’ve been very successful as a program, winning lots of league championships over the years, but we’ve never had a CIF banner to show for it.”

The Cougars do now.

Tied 2-2 through regulation and overtime, Steele Canyon defeated Eastlake 4-1 in the KFM tiebreaker.

The Cougars (12-13-3) converted on all four of their shots to win the best-of-five tiebreaker in which players go one-on-one with the opposing goalkeeper with kicks taken from the penalty dot.

Eastlake’s Katherine Diaz hit the crossbar while teammate Olivia Sekimoto placed her shot over the crossbar on the Titans’ opening two attempts. Eastlake’s Mina Rodriguez scored to narrow the Cougars’ lead to 3-1 but Hahn promptly converted for Steele Canyon to secure the team’s moment in time – and place in history.

The championship game was a rematch of last year’s Open Division final in which Eastlake won in the KFM tiebreaker.

The Cougars snapped the Titans’ string of back-to-back titles in claiming their first.

“We put a lot of heart into this program,” explained Cleaves, who has coached the school’s girls soccer team for 19 years. “We’ve hit a lot of bumps in the road this year but we’ve never quit.  I’m so proud of the girls. Even when we were down 2-1, we knew we could come back. After we got to PKs, we knew we were going to win.

“I’m so proud of all the seniors who worked so hard.”

Cleaves noted this was the first championship in five finals appearances for his team, including back-to-back Open Division championship games.

The ninth-seeded Cougars had to work hard to achieve their goal of being CIF champions this season. Steele Canyon defeated four higher-seeded teams in its history-making run, starting with a 2-1 victory at eighth-seeded Point Loma on Feb. 13.

The Cougars then upset top-seeded San Marcos, 2-1, in the quarterfinals on Feb. 16 before winning a 3-1 KFM tiebreaker against fourth-seeded Poway in the semifinals on Feb. 20.

In order to claim that prize that had proved to elusive in the past, the finally had to get past the Titans, who were seeded sixth in the playoff bracket and had recorded two upset wins of their own in eliminating third-seeded Rancho Bernardo, 2-1 in the quarterfinals and second-seeded Bishop’s, 2-0, in the semifinals.

The Cougars had to work hard to clear that final hurdle.

Steele Canyon took a 1-0 lead in the 23rd minute on a 25-yard direct free kick by Ashley Herndon that took an unexpected last-second bounce past Shalit.

It took Eastlake (16-8-5) less than two minutes to tie the score after Sekimoto managed to break through the Cougar defense and nudge a point-blank shot to the left of the Steele Canyon goalkeeper.

The Titans took a 2-1 lead midway through the second half when Britney Buu, coming along the end line, flipped a sharp-angle shot over the goalkeeper.

But the Eastlake celebration was dimmed when Herndon drove around the last line of Titan defenders in the 67th minute to loft a perfectly-placed cross onto the forehead of Hahn, who nodded the ball into the Eastlake net.

Both teams had golden opportunities to win the game before advancing to the tiebreaker.

Eastlake’s Daniela Chaveria directed a blast at the Steele Canyon net eight minutes into the 15-minute sudden-victory overtime period that the Cougar goalkeeper made a sliding kick-save on to send the ball flying out of bounds.

Eastlake’s Shalit made the best save on the night when she stuffed a point-blank shot in the 92nd minute on Zeldin.

Hahn drew the honor of scoring the game-tying goal in regulation and the game-winning PK in the tiebreaker for the Cougars.

“It’s absolutely insane,” Hahn remarked about winning the team’s first CIF championship. “We knew we deserved this. We wanted to do it so bad. When we went to PKs, we knew that was our game. It’s an incredible feeling. I’m still in shock.”

Cleaves said the team, which lost eight seniors to graduation following the 2017-18 campaign, was overwhelmed at times this season but never gave up.

“We gave up a lot of late goals but we never quit on each other,” Cleaves said. “It’s a good group.”

As in the semifinal game, the Cougars alternated goalkeepers shot-for-shot in the tiebreaker round.

The duo of Chloe Sevilla and Kassandra Jaggard stopped three of four shots against Poway. They were beaten only once by the Titans in the final.

As a reward for their division title, the Cougars received the No. 7 seed in the Southern California Division II regional championship tournament, drawing a road game against No. 2 Manhattan Beach Mira Costa (24-6-1) in Tuesday’s opening round.

The 10th-seeded West Hills Wolfpack may have pulled off the biggest shocker of this year’s championship tournament by claiming the Division III boys title with a 2-1 win over Central Union in a game played last Saturday at Mission Bay High School.

Rian Stiles scored both goals in the victory while Trevor Clark and Jarrett Pricor each collected assists. Carter Orchulli made seven saves to earn the goalkeeper win.

West Hills (19-3-3) defeated four higher-seeded teams in its run to the championship title, allowing just two goals along the way.

The Wolfpack, the runner-up to El Cajon Valley in the Grossmont Valley League standings, kicked off the playoffs with a 1-0 win at seventh-seeded Vista and followed that with a 6-5 KFM tiebreaker win at second-seeded Southwest El Centro. West Hills drilled third-seeded Sage Creek, 3-1, in the ensuing semifinals before topping eighth-seeded Central Union, which finished runner-up in last year’s finals.

Giovanni Velazquez and Alfredo Sandoval each scored goals for the Monarchs.

Monte Vista had advanced to the championship game with playoff wins over sixth-seeded Clairemont (2-0 in the quarterfinals) and seventh-seeded San Diego Jewish Academy (2-1 in the semifinals).

Lopez, a freshman, led the Foothillers with 24 goals this season.

Grossmont goalkeeper Ashlyn Dean made 11 saves on 12 shots to post the win.

Grossmont advanced to the championship game after winning a 6-5 KFM tiebreaker from fifth-seeded Bonita Vista (17-5-3) in the semifinals while Valhalla upset second-seeded Patrick Henry (9-5-6) by a score of 1-0 in the semifinals.

Violent sexual predator to be released in East County