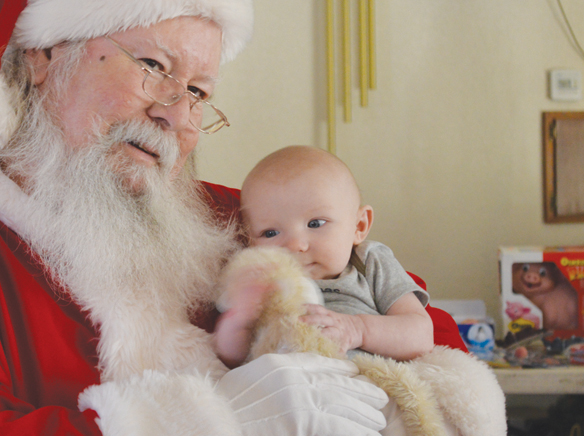 Lord Licorice, Mr. Mint, GrandMa Nutt, Princess Lolly and Queen Frostine are common names to the children of all ages that grew up traveling through the Candy Cane Forest and Gum Drop Mountain in the quest to reach the Candy Castle and win the game.

Lord Licorice, Mr. Mint, GrandMa Nutt, Princess Lolly and Queen Frostine are common names to the children of all ages that grew up traveling through the Candy Cane Forest and Gum Drop Mountain in the quest to reach the Candy Castle and win the game.

Interesting fact. Originally designed in San Diego by Eleanor Abbott while recovering from polio in 1945, Candy Land has delighted children for decades. Though the game has changed a bit since its humble beginnings, in 2005 it’s induction into the Toy Hall of Fame sealed its destiny into America’s history.

For 12 years, the Santee-Lakeside Elks Lodge #2698 has made a holiday tradition of providing children of the community a chance to play the live version, meet some of the infamous characters of the board game, get some real time with Santa Claus and receive presents and holiday treats. This year was no exception as families lined up at the Elks Lodge on Sunday, Dec. 15, to meet their favorite characters and parade through the living board game, with the help of the Elks and Miss Lakeside 2013 Jessica Besaw and her court.

Lord Licorice, Elk member Dave Hosted said this is an event that they look forward to every year an that it is now tradition, not only with the Elks, but the many families that participate in the event every year.

“I have one young man that I am waiting for today especially,” he said. “He came to his first drip through Candyland-Live when he was five and has not missed a year. He is 17 this year and I still expect him to show up.”

With part of the lodge set up as a living game board, each child (the players) drew colored tiles and began their journey and at each stop got to stop and speak with the characters. Only in this game, the final destination is not the Candy Castle, it is a visit with Santa Claus. And a very merry soul was he. With Mrs. Claus sitting by his side, he heard the wishes of many a child, let them tug at his beard to show them it was real and gave them a present (and a photo) before they headed to the gift court to pick out one of their own.

Hosted said the funny thing was that when they began, it was a free event, but no one showed up. He said they charged $1 the next time and had a full house and it has been that way since.

But this is not the only thing that these East County Elks provide. Each year they deliver 30 days worth of groceries, including all of the holiday favorites, to 30 families in need in the local community. Hosted said to put it in perspective, “We deliver 1-1.5 tons of food each year.