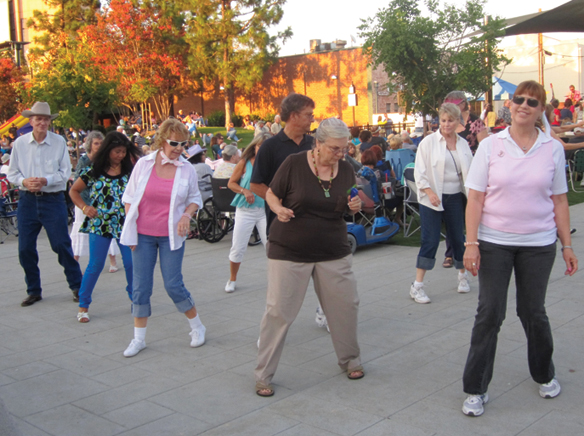 Like clockwork, a group of friends show up regularly each Friday evening for the Concert on the Promenade. They set up their chairs towards the back of the promenade, sitting down only long enough to get a sip of water before they’re up on their feet. Almost as soon as the band strikes up the first song, they begin line dancing.

The group grows a little larger each month, particularly as new line dance lessons start up. Line dancing has been popular for many reasons.

Like clockwork, a group of friends show up regularly each Friday evening for the Concert on the Promenade. They set up their chairs towards the back of the promenade, sitting down only long enough to get a sip of water before they’re up on their feet. Almost as soon as the band strikes up the first song, they begin line dancing.

The group grows a little larger each month, particularly as new line dance lessons start up. Line dancing has been popular for many reasons.

Patricia Alesi, who takes intermediate line dance classes from Diane Rojas at the Foothills Adult Center, is one of the regulars at the El Cajon concerts, as well as Santee.

“It’s wonderful exercise,” Alesi said. “I get to go to all kinds of places, and make lots of friends.”
One of those friends is Flor Swartz, who had seen the line dancers for the first time at the concerts in El Cajon.
“I just started joining in with them. I already knew how to do the ‘Electric Slide,’ but I wanted to learn more. They encouraged me to just get in and join them. I love to dance, so I learn pretty easy,” Swartz said.

But is line dancing really any sort of exercise? Diana Papworth, who has been teaching the dance for 17 years at 24-Hour Fitness in Santee, answers with a resounding “Yes.”

Free to 24-Hour Fitness members, Papworth’s class draws nearly 50 people.
“When you dance you’re using your whole body, your core, plus arms and legs. And you work harder when you dance than when you walk. Because it’s a lot more fun, too, people tend to dance a lot longer than they’d walk,” Papworth said.

For a beginner to line dancing as many as 400 calories can be worked off. “But once you learn, and you don’t need to start and stop so often, it will be more like 500 calories you burn,” she said.

But the real love for line dancing has more to do with the community-building and making of friends, as the concert-goers have found.
At the time that Papworth started teaching at 24-Hour Fitness, the line dancing craze was at the height of its popularity, during which all the clubs like InCahoots in Mission Valley and Mulvaney’s in Santee were packed every night of the week.

Country music had become all the rage in the early 90s. “There’s still a niche, which is out more here in East County,” said Papworth. “People have begged me to not ever cancel the class at 24-Hour.”

Typically, women go for the line dancing scene more than men do. Papworth explained that, socially, it’s still more acceptable for women to get out and dance by themselves.

“Anyone can do line dancing,” Papworth said. “You can go from basic to very fancy. Most steps are simple enough where you use grape-vines, so the more you do it the easier it becomes.”

Cathie Lopez, who teaches Line Dance on Monday evenings at the Lakeside Community Center, agrees. “All people of all ages have a good time with this,” she said.

Most line dances are transferrable to other songs. For instance at clubs like InCahoots, there’s a dance called ‘Tush Push’ that you could do five different times through the night to five different songs.

It all depends on the sound, beat and rhythm of the music. Many line dances are choreographed specifically to songs that are not what one would think of as a country song. Some are hip hop or Latin; others are rock and roll.

An instantly recognizable song called “Cupid Shuffle” is actually not a country dance song, either, but it is done in a line, first to the left, then to the right as in the words of the song. It’s actually more of a pre-choreographed hip-hop song, but it’s like the “Electric Slide” in its popularity

“You’ll see “Cupid Shuffle” performed everywhere, even at weddings,” said Papworth.
If there’s one thing that line dancers need, it’s more places to dance other than outdoor concerts, which will soon close out for the summer and the recent closing of Lacy J.’s in Santee. Hacienda Casa Blanca in El Cajon often has special dance events in their bar where people can start something.

“If you want to go line dancing somewhere, bring a group of people with you, and take over,” suggests Papworth. “Somebody can always start out with “Electric Slide and Tush-Push.”

The line dancing classes taught by Diane Rojas at the Foothills Adult Center begin on September 10. Registration is available at www.adultschool.guhsd.net.

Classes are also taught by Cathie Lopez on Monday evenings at the Lakeside Community Center. She may be reached for information at cathie.lopez@gmail.com.