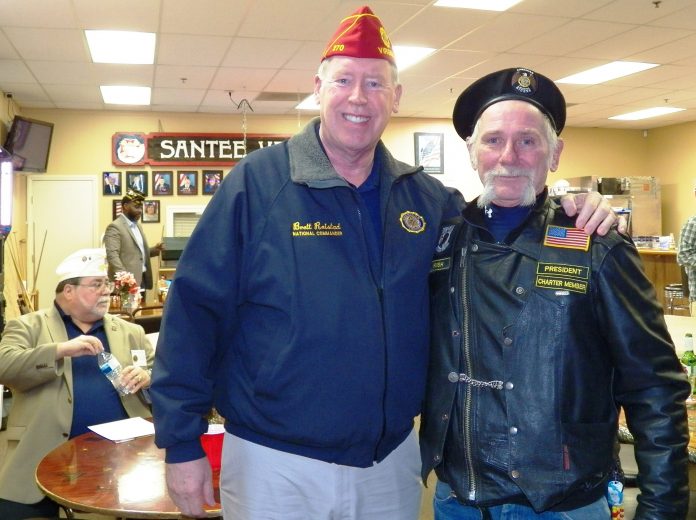 A beloved organization celebrates 100 years of service to the veteran community and Santee members were honored to help usher in the beginnings of a new century of work and commitment.

A beloved organization celebrates 100 years of service to the veteran community and Santee members were honored to help usher in the beginnings of a new century of work and commitment.

“It’s nice that the National Commander of The American Legion chose to stop here in Santee for a meet and greet after the Rededication of the Ocotillo Wells Veterans Memorial Cross,” Henriksen said. “We believe it’s a privilege and an honor to represent our city and our town, as well as our Post, for this visit.”

“Our volunteer work is always for veterans first, for God and country,” Thweatt said, while he awaited Reistad’s arrival. “I’ve been advising some Vietnam veterans around Ramona, and I want to ask the National Commander to see that what’s happening with the VA is straightened out about Agent Orange exposure. These veterans need a better hearing and more of an audience.”

Leader of the roughly San Diego countywide local level of The American Legion, District 22 Commander Chris Yates, introduced Reistad and noted that Santee Post 364 is one of only three, among the 28 Legion Posts in the district, to have earned the “Post Excellence” Award this year.

Reistad spoke to the gathering briefly, mentioning the honor of being on the Legion float in Pasadena the day before, and his gratification at being selected as National Commander for the 100-year anniversary of the Legion.

“My first and primary focus for the centennial year is on fighting how we are losing membership,” Reistad said. “We are 72,000 Legionnaires short nationwide versus the same time last year, which is surprising.”

“I request that you begin personally engaging with potential members instead of staying with a social media focus.”

Reistad informed his audience that he was familiar with California.

“I love San Diego,” Reistad said. “Remember that I’m here for you, I’m one of you, and I’m looking forward to the rest of the week in California.”

Reistad concluded his visit to San Diego County with a full schedule of activities on Thursday, Jan. 3.

Reistad received a presentation about a promising new treatment for combat veterans experiencing post-traumatic stress and related conditions in the morning. He toured the Chula Vista Veterans home before lunch there, and then was escorted along the Greatest Generation Walk along the Downtown San Diego bayfront in the afternoon.