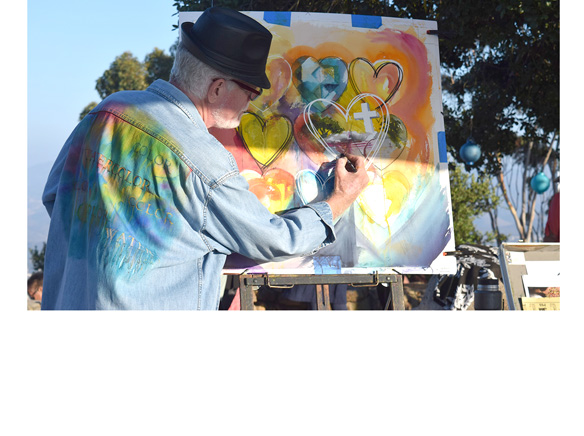 The view from atop Mt. Helix was as spectacular as ever, romantically hazy in the cool evening air of Aug. 12. And the celebration of local artworks, music, food and beverages, all in the midst of a festive crowd, made the night magical.

The view from atop Mt. Helix was as spectacular as ever, romantically hazy in the cool evening air of Aug. 12. And the celebration of local artworks, music, food and beverages, all in the midst of a festive crowd, made the night magical.

The event was the 10th Annual heART of Mt. Helix, the major yearly fundraiser supporting the Mt. Helix Park Foundation, for upkeep and improvements to the amphitheater and park grounds, as well as ongoing educational programs at the park. More than 500 attendees were on hand for the delightful hilltop party. Area artists displayed their creations, including live art-working demonstrations.

One of these local live painting artists was Chuck McPherson, who has been participating in this way for the full 10 years of the heART event. McPherson was wrapping up final touches on his original watercolor of the night, slated to be live auctioned in a few minutes, when he spoke about the series of heART fundraisers. He had titled his painting “Ten of Hearts,” for showing nine different hearts, with a tenth heart looming near the middle that was a small replica of McPherson’s  first such work from 2008.

McPherson has also been serving on the heART Committee for 10 years. Asked for his impressions of the decade-long series and of this year’s in particular, McPherson replied, “What’s been great is the fact that everyone laughed at us that first year, for having one major fundraiser that was supposed to raise all the money needed for the foundation during the year.”

The heART events have garnered more than $600,000 total over the past nine years. McPherson’s painting last year was hammered down at auction for $2,400. He disclosed that he wanted to beat that figure for 2017, and the winning bid from Andy Phemister was $2,400, matching last year.

The event displayed artworks for both the 2017 Student Art Contest, for students from Grossmont Community College, and the premiere 2017 heART Jury Art Show. The seven winning original works of art from the juried show were available for purchase.

Musical entertainment during the evening serenaded event-goers on both park levels. Appearing on the main stage of the lower amphitheater were members of quartet The Jamacha Project, performing a mix of Americana, rock, country, jazz and blues. Next up for an early set were members of The Might Untouchables, delivering a variety of popular musical genres from classic rock, country, to Motown and Latin favorites and current pop hits. After conclusion of the live-bidding auction, The Mighty Untouchables returned to the stage to play for dancing under the stars. At the upper park level near the foot of the Mt. Helix Memorial Cross, live musical performances came from Tom Hawk, “The Yodeling Professor,” with western and country songs, and Adrian Ahearn, an award-winning steel drum performing artist.

Auctioneer Zachary Krone, recognized as a specialist in benefit auctions, was further an engaging and very entertaining emcee. Unique experiences offered at the live auction included a private wine tasting for 12 at Mt. Helix Park, a surf and turf dinner for eight at the Mt. Helix Rotating House, an invitation only gourmet dinner for eight at Mt. Helix Park, and getaway stays at exclusive resorts and hotels.

Out and about at the Louis Steltzer County Park

Fourth of July celebrations in Santee attended by thousands