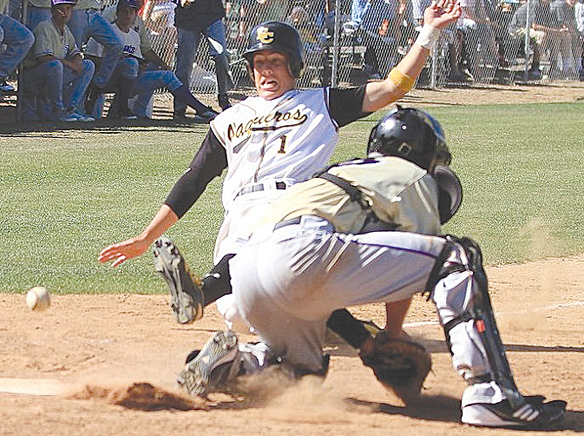 Granite Hills and Helix posted identical 21-11 overall records, but the Eagles nipped the Highlanders by a single game to capture the Grossmont Hills League pennant. However, the biggest question is how Grossmont, which posted seven consecutive 20-win seasons (2004-11), can bounce back from its poorest season in three decades.

Granite Hills and Helix posted identical 21-11 overall records, but the Eagles nipped the Highlanders by a single game to capture the Grossmont Hills League pennant. However, the biggest question is how Grossmont, which posted seven consecutive 20-win seasons (2004-11), can bounce back from its poorest season in three decades.

Meanwhile, El Capitan is the only champion ever known by the Grossmont Valley League since re-alignment in 2009. However, the Vaqueros have new management following the retirement of Steve Vickery. Thus, it will be up to a bunch of ball clubs hovering around the 500 plateaus — Monte Vista, Santana and Mount Miguel — to step in to challenge for the pennant.

Among the private schools, Christian remains a force in Division IV despite participating in the Eastern League, a circuit with otherwise all large-enrollment public schools. Foothills Christian owns four straight upper-division finishes (three runner-up placements), figuring to continue to knock the door for the Knights' first-ever league crown.

Christian: The Patriots will be underdogs in the Central League after finishing 16-17 a year ago. Top returners include senior catcher A.J. Gregorovic, who batted .404 with 21 RBI a year ago. Stephen Johnston is the top pitcher, who posted a 4-6 record with two saves and a 2.96 ERA.

Foothills Christian: Senior double threat Trevor Tinney is the cornerstone of the Knights. He batted .425 and stole 22 bases as a junior. On the hill his record was 2-3 with a 2.27 ERA.
Grossmont Valley League

El Capitan: Jordan Abruzzo is following a legend in 600 game winner Steve Vickery this season. It will definitely be an uphill climb as the majority of the Vaqueros’ talent has graduated. Third baseman-catcher Eric Lozano is the top returner.

Monte Vista: A change in coaches always leaves question marks as Matt Atkinson, a Monarchs alum, takes over at the helm. Paul O’Connor, a senior pitcher-third baseman, is one of the top players in the league. But will he be enough to allow the Monarchs to challenge for the title?

Santana: Pitchers Alan Strong and Cory Conner head up a rebuilding pitching staff for the Sultans, who finished 11-14-2 a year ago. Outfielder Tyler Browning will lead the offense.

Grossmont: Coming off an unexpected 20-game losing streak, the Foothillers should stop the fall this season. First year coach Chad Williams sure hopes that’s the case.

Helix: Ray Peterson (.381, four home runs, 22 RBI and 12 stolen bases) leads the Highlanders after last year’s 21-11 season. Frankie Nunez figures to contribute as a pitcher and a shortstop, while George Garcia should supply plenty of punch.

Steele Canyon: Eleven Cougars return from last year’s 17-14 season. Tanner Perry (.439, 22 RBI) is the ringleader of a Steele Canyon squad that could surprise.

West Hills: The Wolf Pack introduces a new coach in Cordell Hipolito. The Pack returns 11 players from last year’s 18-15 team. This is a team filled with versatile players led by infielder Frank Mello (.337).

Matadors fight for a shot at league