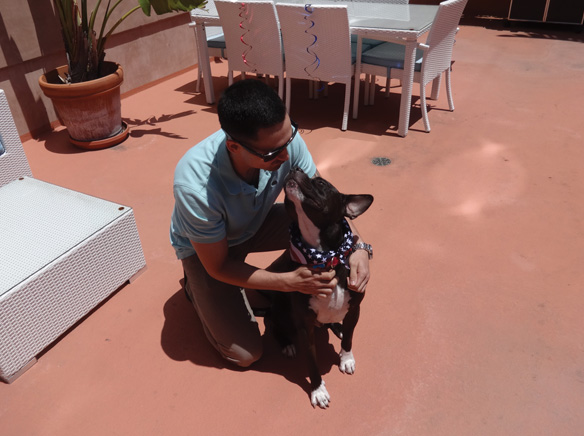 Leaving loved ones behind for deployment might possibly be one of the hardest things that our servicemen and women do. It’s not just children and spouses that stay behind. Service men and women leave behind more than people when they go. They leave behind pets, too.
Soldiers have been forced to make heart-wrenching choices about what to do with their dog, cat, bird, their beloved pets, while they were gone.

Leaving loved ones behind for deployment might possibly be one of the hardest things that our servicemen and women do. It’s not just children and spouses that stay behind. Service men and women leave behind more than people when they go. They leave behind pets, too.
Soldiers have been forced to make heart-wrenching choices about what to do with their dog, cat, bird, their beloved pets, while they were gone.
But they don’t have to anymore. Not since June of 2011, when Santee residents Alisa and Shawn Johnson founded Dogs on Deployment, an organization that finds pet boarders for deployed, active military pet owners. The Johnsons, who serve in the US Navy and Marine Corps, had a need to home their pets during simultaneous duty away from home. They solved their pet care dilemma, but what about the pets of other people like them? The Johnsons identified the pet care need for all active servicemen and women, and took action to fill it.
More than four years later, Dogs on Deployment is thriving. A national non-profit organization with chapters in multiple cities and on military bases, Dogs on Deployment have earned sponsorships, awards, and high-profile media attention for the work they do — and it goes beyond finding boarders for pets of those deployed.  Dogs on Deployment helps financially with pet emergencies, they advocate for animal ownership rights on military bases, they educate owners about animal health and insurance options. Dogs on Deployment is the go-to organization for keeping a pet healthy and safe back home.
That peace of mind is proving invaluable for the pets and pet owners of the U.S. military, and the mission has gotten remarkably positive response and attention. Rich Setzer, the San Diego Coordinator for Dogs on Deployment, recently received a $5,000 check from Petsmart Charities at the Santee Petsmart on September 12th, 2015.
Like any non-profit, Dogs on Deployment relies on volunteers, the coordinators, the boarders, and the people who work booths at local events. Setzer assists West Coast regional coordinator Liz Kington, who reports to Dogs on Deployment national leadership. The Western region consists of Washington, Oregon, California, Alaska and Hawaii.
Setzer describes the fostering process much like a “match.com” for pets. The pet owner getting deployed will go on to the Dogs on Deployment website, similar to the way a potential boarder does, create a profile, and fill in their information to find the perfect fit for their pet. After the vetting process is completed, the meeting process takes place, “playdates” they are called, to identify any issues.
Setzer, retired Navy, became involved with Dogs on Deployment in mid-2014. He became San Diego Coordinator in March 2015. “Once I realized I needed to be doing more, I looked for volunteer opportunities. My second cousin told me about Dogs on Deployment. It looked like fun. I’m a long time pet owner,” he said.
“At the end of the day, I enjoy working with like-minded people. I’m retired Navy, ten years an officer. I know the challenges there. It’s touched on different sides of my life I can relate to, military and pet owner. It’s in my genes I guess, I just want to help where I can,” said Setzer.
At the heart of Dogs on Deployment is the quality that makes people want to help others. Those who serve, and those who help those who serve, have that quality in common. And those who find themselves involved with Dogs on Deployment also have in a common a love for animals.
In the summer of 2014, Carla Mead, a school teacher who had worked with animal rescues, fostering and no-kill shelter movements in the past, found the Dogs on Deployment website. She clicked out of curiosity, and soon was signed up to be a boarder. Mead and her husband, Jon ended up boarding a dog, Axle, for ENS James McCullen, who was from Philadelphia, just like Carla. It was a perfect match.
“It was an unbelievable relief,” McCullen said of his time away from Axle. “Knowing Axle was cared for allowed me to focus on the mission first.”
The Meads went beyond just giving Axle a temporary residence in the hearts and home. McCullen had an empty space without his dog, and the Meads aimed to fill it.
“Emails were pretty frequent between Carla, Jon and I. Attached pictures would really brighten my day. The best were videos, you could tell how happy he was playing with Donovan [the Mead’s dog]. ‘Axle’ also sent me a few care packages, well, they were at least addressed from him and the cards were always signed “Love, Axle,”” McAllen recalled.
Mead, currently the Los Angeles Coordinator for Dogs on Deployment, humbly downplays her part in helping active duty like McCullen. “What I’m doing is nothing compared to what they’re doing. The military serves us everyday, it’s not hard to serve them,” she said.
Watching McCullen and Axle reunite after eight months was bittersweet for the Meads. “To see them together is amazing. The sadness we felt at him [Axle] leaving was nothing compared to the joy of them reuniting,” Mead said.
McCullen has a fond recollection of the reunion, too. “The flood gate was open with kisses,” he said.
The helping gene Setzer referred to, the quality that compels people to help others, to care about an animal, it’s inherent in the people making Dogs on Deployment the success that it is.
The Meads just took in another dog, Gunner, for a deployed soldier who is a Gunner’s mate. Mead’s excitement at the new (canine) member of their pack, at the prospect of helping another military family with a pet, is hard for her to contain. “If you believe in something, it’s not difficult. And it’s not hard to love a dog!”
To learn more about Dogs on Deployment, visit www.dogsondeployment.org.

Was the El Monte sand mining project a done deal from...